Wall Street brokerages expect Webster Financial Co. (NYSE:WBS – Get Rating) to announce $486.79 million in sales for the current quarter, according to Zacks. Four analysts have issued estimates for Webster Financial’s earnings. The lowest sales estimate is $472.85 million and the highest is $502.00 million. Webster Financial posted sales of $300.52 million in the same quarter last year, which suggests a positive year-over-year growth rate of 62%. The company is expected to announce its next quarterly earnings report on Monday, January 1st.

According to Zacks, analysts expect that Webster Financial will report full-year sales of $2.31 billion for the current fiscal year, with estimates ranging from $2.26 billion to $2.36 billion. For the next fiscal year, analysts forecast that the company will post sales of $2.63 billion, with estimates ranging from $2.53 billion to $2.70 billion. Zacks Investment Research’s sales calculations are an average based on a survey of analysts that cover Webster Financial.

Webster Financial (NYSE:WBS – Get Rating) last issued its earnings results on Thursday, January 20th. The financial services provider reported $1.31 earnings per share (EPS) for the quarter, topping analysts’ consensus estimates of $1.10 by $0.21. Webster Financial had a return on equity of 13.94% and a net margin of 32.29%. The business had revenue of $316.90 million during the quarter, compared to the consensus estimate of $306.87 million. During the same period in the prior year, the business posted $0.99 EPS. The company’s revenue for the quarter was up 7.9% on a year-over-year basis.

In other Webster Financial news, Director William L. Atwell bought 2,500 shares of the firm’s stock in a transaction that occurred on Monday, March 7th. The stock was purchased at an average price of $53.43 per share, for a total transaction of $133,575.00. The acquisition was disclosed in a filing with the SEC, which can be accessed through the SEC website. Also, insider Thomas X. Geisel sold 7,500 shares of the stock in a transaction that occurred on Tuesday, March 15th. The shares were sold at an average price of $57.43, for a total value of $430,725.00. The disclosure for this sale can be found here. Corporate insiders own 1.85% of the company’s stock.

The company also recently announced a quarterly dividend, which was paid on Friday, February 11th. Shareholders of record on Friday, January 28th were given a $0.40 dividend. This represents a $1.60 annualized dividend and a yield of 3.20%. The ex-dividend date was Thursday, January 27th. Webster Financial’s payout ratio is currently 36.28%.

About Webster Financial (Get Rating)

Webster Financial Corp., is holding company, which engages in the provision of financial services to individuals, families, and businesses. It operates through the following business segments: Commercial Banking, HSA Bank, and Retail Banking. The Commercial Banking segment includes commercial banking and private banking. 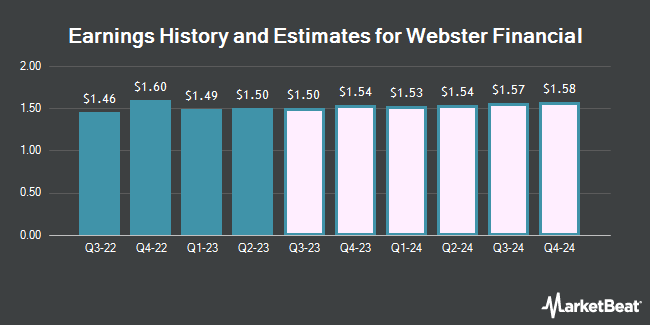 Complete the form below to receive the latest headlines and analysts' recommendations for Webster Financial with our free daily email newsletter: