$3.19 Billion in Sales Expected for The Williams Companies, Inc. (NYSE:WMB) This Quarter

Wall Street brokerages expect The Williams Companies, Inc. (NYSE:WMB – Get Rating) to report sales of $3.19 billion for the current quarter, Zacks reports. Two analysts have made estimates for Williams Companies’ earnings, with the highest sales estimate coming in at $3.37 billion and the lowest estimate coming in at $3.00 billion. Williams Companies reported sales of $2.61 billion in the same quarter last year, which indicates a positive year over year growth rate of 22.2%. The company is scheduled to announce its next earnings results on Monday, January 1st.

According to Zacks, analysts expect that Williams Companies will report full-year sales of $12.00 billion for the current fiscal year, with estimates ranging from $11.15 billion to $13.35 billion. For the next fiscal year, analysts expect that the company will report sales of $11.98 billion, with estimates ranging from $10.46 billion to $13.54 billion. Zacks Investment Research’s sales averages are an average based on a survey of analysts that follow Williams Companies.

Williams Companies (NYSE:WMB – Get Rating) last announced its quarterly earnings data on Monday, February 21st. The pipeline company reported $0.39 earnings per share (EPS) for the quarter, beating the consensus estimate of $0.31 by $0.08. The company had revenue of $3.26 billion during the quarter, compared to analysts’ expectations of $2.82 billion. Williams Companies had a net margin of 14.27% and a return on equity of 11.60%. During the same quarter in the prior year, the company earned $0.31 EPS.

The Williams Companies, Inc, together with its subsidiaries, operates as an energy infrastructure company primarily in the United States. It operates through Transmission & Gulf of Mexico, Northeast G&P, West, and Gas & NGL Marketing Services segments. The Transmission & Gulf of Mexico segment comprises Transco and Northwest natural gas pipelines; and natural gas gathering and processing, and crude oil production handling and transportation assets in the Gulf Coast region, as well as various petrochemical and feedstock pipelines. 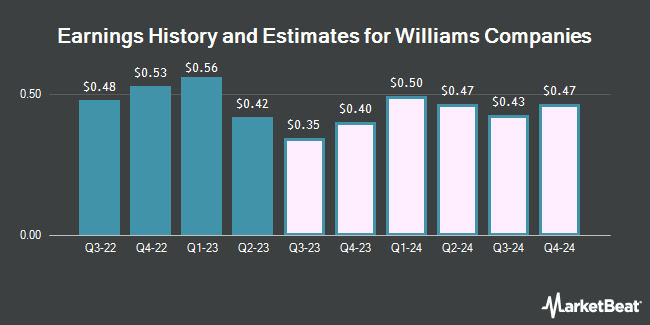 Complete the form below to receive the latest headlines and analysts' recommendations for Williams Companies with our free daily email newsletter: