Shares of fuboTV Inc. (NYSE:FUBO – Get Rating) have been assigned an average rating of “Hold” from the ten ratings firms that are covering the company, MarketBeat Ratings reports. Five equities research analysts have rated the stock with a hold rating and three have given a buy rating to the company. The average 12 month target price among analysts that have issued a report on the stock in the last year is $24.71.

fuboTV (NYSE:FUBO – Get Rating) last announced its quarterly earnings data on Wednesday, February 23rd. The company reported ($0.76) earnings per share (EPS) for the quarter, missing the Zacks’ consensus estimate of ($0.66) by ($0.10). The company had revenue of $231.06 million for the quarter, compared to the consensus estimate of $213.27 million. fuboTV had a negative net margin of 59.84% and a negative return on equity of 52.98%. The company’s revenue was up 119.9% compared to the same quarter last year. During the same quarter last year, the firm posted ($0.39) earnings per share. On average, research analysts predict that fuboTV will post -2.54 earnings per share for the current fiscal year.

In other news, insider Alberto Horihuela sold 161,454 shares of the business’s stock in a transaction dated Tuesday, March 29th. The shares were sold at an average price of $7.56, for a total value of $1,220,592.24. The transaction was disclosed in a filing with the SEC, which is available through the SEC website. Insiders own 13.20% of the company’s stock.

About fuboTV (Get Rating)

fuboTV Inc operates a live TV streaming platform for live sports, news, and entertainment content in the United States and internationally. Its fuboTV platform allows customers to access content through streaming devices, as well as on SmartTVs, computers, mobile phones, and tablets. The company is headquartered in New York, New York. 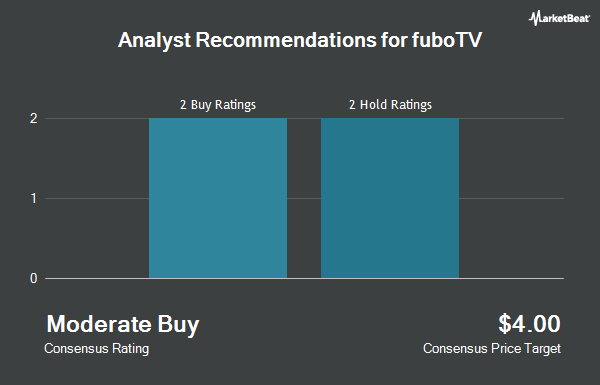 Receive News & Ratings for fuboTV Daily - Enter your email address below to receive a concise daily summary of the latest news and analysts' ratings for fuboTV and related companies with MarketBeat.com's FREE daily email newsletter.

Complete the form below to receive the latest headlines and analysts' recommendations for fuboTV with our free daily email newsletter: