Cim Investment Management Inc. increased its holdings in Quotient Technology Inc. (NYSE:QUOT – Get Rating) by 100.0% during the fourth quarter, according to its most recent disclosure with the SEC. The institutional investor owned 56,628 shares of the technology company’s stock after buying an additional 28,314 shares during the period. Cim Investment Management Inc. owned 0.06% of Quotient Technology worth $375,000 as of its most recent SEC filing.

QUOT has been the topic of several recent analyst reports. StockNews.com began coverage on Quotient Technology in a research note on Thursday, March 31st. They issued a “hold” rating on the stock. Zacks Investment Research upgraded shares of Quotient Technology from a “sell” rating to a “hold” rating in a report on Wednesday, March 23rd. One equities research analyst has rated the stock with a sell rating, two have issued a hold rating and three have given a buy rating to the stock. According to data from MarketBeat, the company has an average rating of “Hold” and an average target price of $12.75.

About Quotient Technology (Get Rating)

Want to see what other hedge funds are holding QUOT? Visit HoldingsChannel.com to get the latest 13F filings and insider trades for Quotient Technology Inc. (NYSE:QUOT – Get Rating). 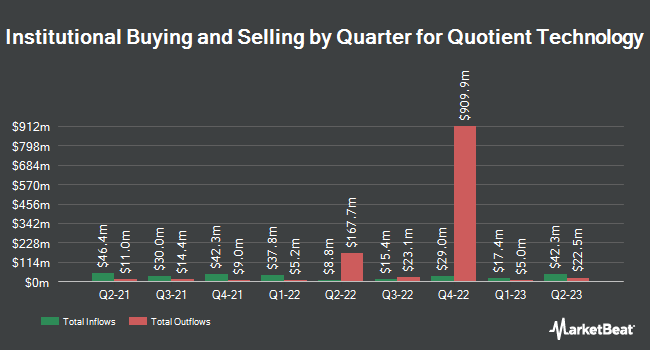 BellRing Brands, Inc. Given Average Recommendation of “Buy” by Analysts

Alphatec Holdings, Inc. Given Consensus Rating of “Hold” by Analysts

Conagra Brands, Inc. Given Average Rating of “Hold” by Brokerages

Complete the form below to receive the latest headlines and analysts' recommendations for Quotient Technology with our free daily email newsletter: