Entergy Corporation (NYSE:ETR – Get Rating) announced a quarterly dividend on Monday, April 11th, RTT News reports. Shareholders of record on Thursday, May 5th will be given a dividend of 1.01 per share by the utilities provider on Wednesday, June 1st. This represents a $4.04 annualized dividend and a yield of 3.32%.

Entergy has a payout ratio of 60.0% meaning its dividend is sufficiently covered by earnings. Analysts expect Entergy to earn $6.74 per share next year, which means the company should continue to be able to cover its $4.04 annual dividend with an expected future payout ratio of 59.9%.

Entergy (NYSE:ETR – Get Rating) last issued its quarterly earnings data on Wednesday, February 23rd. The utilities provider reported $0.76 earnings per share for the quarter, topping analysts’ consensus estimates of $0.70 by $0.06. Entergy had a net margin of 9.53% and a return on equity of 10.85%. The business had revenue of $2.72 billion during the quarter, compared to the consensus estimate of $2.32 billion. During the same quarter in the prior year, the firm posted $0.71 earnings per share. Analysts anticipate that Entergy will post 6.33 EPS for the current fiscal year.

Entergy Corp. is a holding company, which engages in electric power generation and distribution. It operates through the following segments: Utility and Entergy Wholesale Commodities. The Utility segment includes the generation, transmission, distribution, and sale of electric power and the operations of a natural gas distribution business. 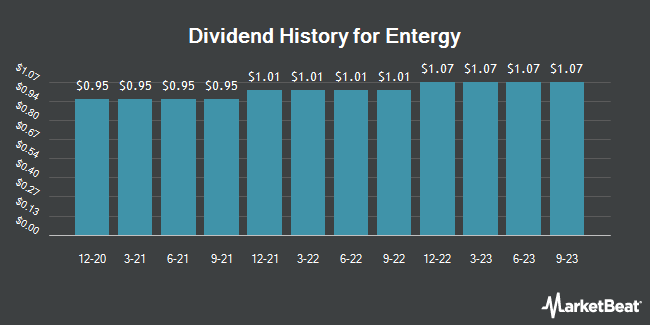 Dropbox, Inc. Given Average Rating of “Buy” by Analysts

Augusta Gold Corp. Short Interest Up 273.6% in May