Equities analysts expect Angi Inc. (NASDAQ:ANGI – Get Rating) to report $436.45 million in sales for the current quarter, Zacks Investment Research reports. Six analysts have made estimates for Angi’s earnings, with the lowest sales estimate coming in at $428.27 million and the highest estimate coming in at $443.20 million. Angi reported sales of $387.03 million in the same quarter last year, which would indicate a positive year-over-year growth rate of 12.8%. The firm is scheduled to announce its next quarterly earnings results on Monday, January 1st.

Angi (NASDAQ:ANGI – Get Rating) last posted its quarterly earnings data on Tuesday, February 15th. The technology company reported ($0.05) EPS for the quarter, beating analysts’ consensus estimates of ($0.06) by $0.01. The company had revenue of $415.86 million during the quarter, compared to analysts’ expectations of $414.73 million. Angi had a negative return on equity of 6.00% and a negative net margin of 4.24%. During the same quarter in the prior year, the business earned ($0.03) earnings per share.

Angi, Inc is a holding company, which engages in the provision of digital marketplace for home services. It operates through the North America and Europe segments. It offers consumer services and professional services. The North America segment includes the operations HomeAdvisor, Angie’s List, Handy, mHelpDesk, HomeStars and Fixd Repair. 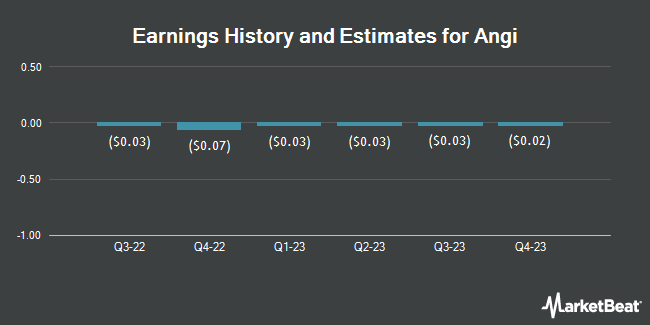 Receive News & Ratings for Angi Daily - Enter your email address below to receive a concise daily summary of the latest news and analysts' ratings for Angi and related companies with MarketBeat.com's FREE daily email newsletter.

Complete the form below to receive the latest headlines and analysts' recommendations for Angi with our free daily email newsletter: