Argan, Inc. (NYSE:AGX – Get Rating) announced a quarterly dividend on Tuesday, April 12th, Wall Street Journal reports. Investors of record on Thursday, April 21st will be paid a dividend of 0.25 per share by the construction company on Friday, April 29th. This represents a $1.00 annualized dividend and a yield of 2.51%. The ex-dividend date is Wednesday, April 20th.

Argan has a dividend payout ratio of 33.9% meaning its dividend is sufficiently covered by earnings.

Several equities analysts recently issued reports on the company. StockNews.com initiated coverage on Argan in a research report on Thursday, March 31st. They issued a “buy” rating on the stock. TheStreet downgraded shares of Argan from a “b-” rating to a “c” rating in a report on Tuesday, January 25th. 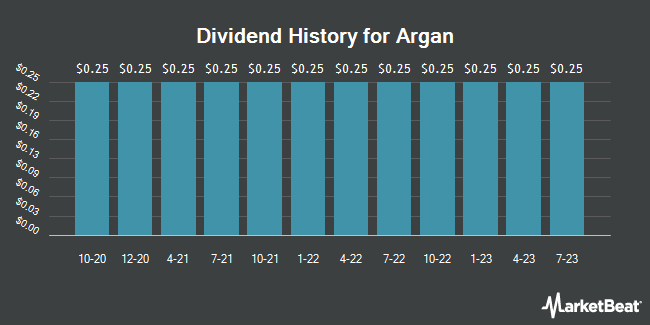 Receive News & Ratings for Argan Daily - Enter your email address below to receive a concise daily summary of the latest news and analysts' ratings for Argan and related companies with MarketBeat.com's FREE daily email newsletter.

Complete the form below to receive the latest headlines and analysts' recommendations for Argan with our free daily email newsletter: