Fortis (TSE:FTS – Get Rating) had its target price upped by stock analysts at JPMorgan Chase & Co. from C$59.00 to C$63.00 in a research report issued on Tuesday, BayStreet.CA reports. JPMorgan Chase & Co.‘s price target indicates a potential downside of 2.28% from the company’s current price.

Fortis (TSE:FTS – Get Rating) last announced its quarterly earnings data on Friday, February 11th. The company reported C$0.63 earnings per share for the quarter, missing the Zacks’ consensus estimate of C$0.72 by C($0.09). The firm had revenue of C$2.58 billion for the quarter, compared to analyst estimates of C$2.36 billion. On average, equities analysts predict that Fortis will post 2.9799998 EPS for the current fiscal year.

Fortis Inc operates as an electric and gas utility company in Canada, the United States, and the Caribbean countries. It generates, transmits, and distributes electricity to approximately 438,000 retail customers in southeastern Arizona; and 100,000 retail customers in Arizona's Mohave and Santa Cruz counties with an aggregate capacity of 3,485 megawatts (MW), including 53 MW of solar capacity and 252 MV of wind capacity. 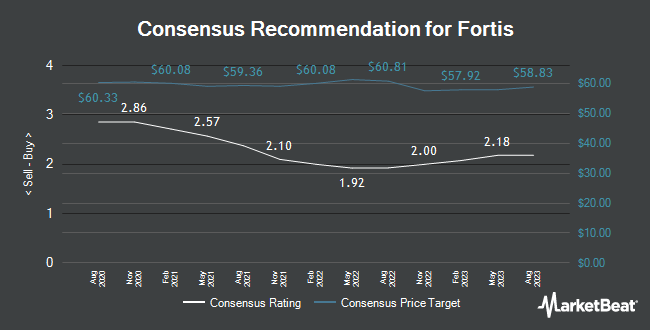 Receive News & Ratings for Fortis Daily - Enter your email address below to receive a concise daily summary of the latest news and analysts' ratings for Fortis and related companies with MarketBeat.com's FREE daily email newsletter.

Complete the form below to receive the latest headlines and analysts' recommendations for Fortis with our free daily email newsletter: