Equities analysts forecast that KBR, Inc. (NYSE:KBR – Get Rating) will announce $1.74 billion in sales for the current quarter, according to Zacks Investment Research. Three analysts have provided estimates for KBR’s earnings. The lowest sales estimate is $1.62 billion and the highest is $1.91 billion. KBR reported sales of $1.46 billion in the same quarter last year, which suggests a positive year over year growth rate of 19.2%. The firm is scheduled to announce its next quarterly earnings results on Monday, January 1st.

According to Zacks, analysts expect that KBR will report full year sales of $6.64 billion for the current fiscal year, with estimates ranging from $6.51 billion to $6.87 billion. For the next fiscal year, analysts forecast that the firm will report sales of $7.21 billion, with estimates ranging from $6.70 billion to $8.05 billion. Zacks Investment Research’s sales averages are an average based on a survey of analysts that cover KBR.

KBR (NYSE:KBR – Get Rating) last announced its quarterly earnings data on Tuesday, February 22nd. The construction company reported $0.69 earnings per share for the quarter, topping the Thomson Reuters’ consensus estimate of $0.65 by $0.04. The company had revenue of $2.50 billion during the quarter, compared to analyst estimates of $2.53 billion. KBR had a net margin of 0.25% and a return on equity of 21.62%. The firm’s revenue for the quarter was up 70.5% compared to the same quarter last year. During the same period last year, the business earned $0.51 EPS.

The firm also recently announced a quarterly dividend, which will be paid on Friday, April 15th. Investors of record on Tuesday, March 15th will be issued a $0.12 dividend. This is an increase from KBR’s previous quarterly dividend of $0.11. This represents a $0.48 dividend on an annualized basis and a dividend yield of 0.90%. The ex-dividend date is Monday, March 14th. KBR’s payout ratio is presently 533.33%.

About KBR (Get Rating)

KBR, Inc engages in the provision of differentiated professional services and technologies across the asset and program life-cycle within the government services and hydrocarbons industries. It operates through the following segments: Government Solutions, Technology Solutions, Energy Solutions, Non-strategic Business, and Other. 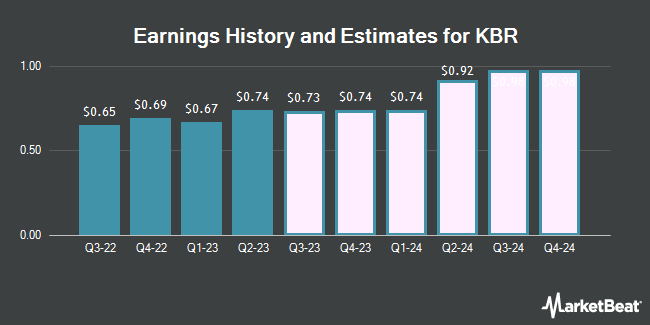