Shares of Pan American Silver Corp. (TSE:PAAS – Get Rating) have been assigned an average recommendation of “Buy” from the eight brokerages that are covering the firm, MarketBeat Ratings reports. Two equities research analysts have rated the stock with a hold recommendation and five have assigned a buy recommendation to the company. The average twelve-month price objective among analysts that have covered the stock in the last year is C$42.00.

The firm also recently announced a quarterly dividend, which was paid on Monday, March 21st. Shareholders of record on Monday, March 21st were paid a $0.12 dividend. This is a positive change from Pan American Silver’s previous quarterly dividend of $0.10. This represents a $0.48 dividend on an annualized basis and a yield of 1.29%. The ex-dividend date of this dividend was Friday, March 4th. Pan American Silver’s dividend payout ratio is currently 58.72%.

In other Pan American Silver news, Senior Officer Steven Busby sold 800 shares of the company’s stock in a transaction dated Friday, March 4th. The stock was sold at an average price of C$33.89, for a total value of C$27,112.00. Following the transaction, the insider now directly owns 113,680 shares in the company, valued at approximately C$3,852,615.20. 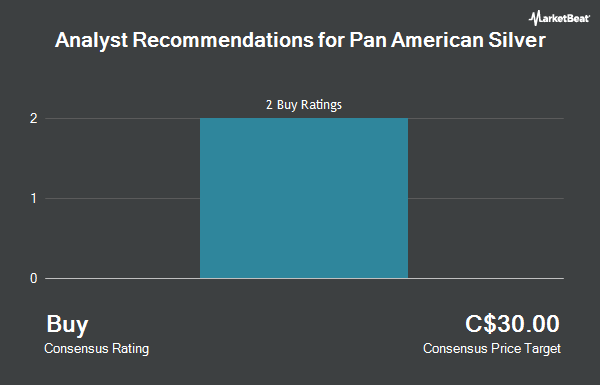 Complete the form below to receive the latest headlines and analysts' recommendations for Pan American Silver with our free daily email newsletter: