Analysts predict that Lannett Company, Inc. (NYSE:LCI – Get Rating) will post sales of $83.65 million for the current quarter, Zacks reports. Two analysts have made estimates for Lannett’s earnings. The highest sales estimate is $85.00 million and the lowest is $82.30 million. Lannett posted sales of $112.37 million during the same quarter last year, which suggests a negative year-over-year growth rate of 25.6%. The business is scheduled to announce its next quarterly earnings report on Monday, January 1st.

According to Zacks, analysts expect that Lannett will report full year sales of $348.68 million for the current year, with estimates ranging from $346.80 million to $350.55 million. For the next year, analysts forecast that the firm will report sales of $348.05 million, with estimates ranging from $345.50 million to $350.59 million. Zacks Investment Research’s sales averages are a mean average based on a survey of analysts that that provide coverage for Lannett.

Lannett (NYSE:LCI – Get Rating) last posted its quarterly earnings results on Thursday, February 3rd. The company reported ($0.39) EPS for the quarter, missing analysts’ consensus estimates of ($0.32) by ($0.07). Lannett had a negative return on equity of 31.06% and a negative net margin of 70.98%. The business had revenue of $86.51 million for the quarter, compared to analyst estimates of $100.60 million. During the same period last year, the firm posted $0.08 EPS.

In other news, Director Patrick G. Lepore acquired 50,000 shares of Lannett stock in a transaction that occurred on Tuesday, February 8th. The shares were acquired at an average price of $0.88 per share, for a total transaction of $44,000.00. The acquisition was disclosed in a legal filing with the SEC, which can be accessed through this hyperlink. Insiders have purchased a total of 99,500 shares of company stock worth $84,420 in the last 90 days. 14.67% of the stock is currently owned by corporate insiders. 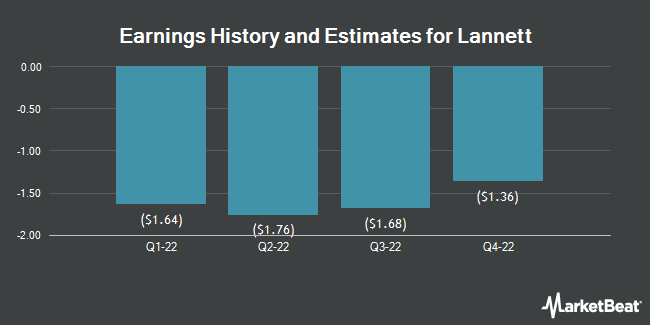 Receive News & Ratings for Lannett Daily - Enter your email address below to receive a concise daily summary of the latest news and analysts' ratings for Lannett and related companies with MarketBeat.com's FREE daily email newsletter.

Complete the form below to receive the latest headlines and analysts' recommendations for Lannett with our free daily email newsletter: