Hydro One (TSE:H) Cut to Underperform at CSFB

Hydro One (TSE:H – Get Rating) was downgraded by investment analysts at CSFB from a “neutral” rating to an “underperform” rating in a note issued to investors on Wednesday, BayStreet.CA reports. They currently have a C$36.00 price target on the stock, up from their previous price target of C$34.00. CSFB’s target price suggests a potential upside of 3.66% from the stock’s current price.

Several other brokerages have also weighed in on H. Scotiabank increased their target price on Hydro One from C$31.00 to C$32.00 in a research report on Thursday, January 27th. Raymond James set a C$32.00 price target on Hydro One and gave the company a “market perform” rating in a research note on Monday, February 28th. CIBC boosted their target price on shares of Hydro One from C$34.00 to C$35.00 in a report on Tuesday, January 11th. Finally, Credit Suisse Group downgraded Hydro One to an “underperform” rating and set a C$34.00 target price for the company. in a report on Wednesday. Two research analysts have rated the stock with a sell rating, seven have issued a hold rating and two have assigned a buy rating to the company’s stock. Based on data from MarketBeat, Hydro One has an average rating of “Hold” and a consensus target price of C$32.71. 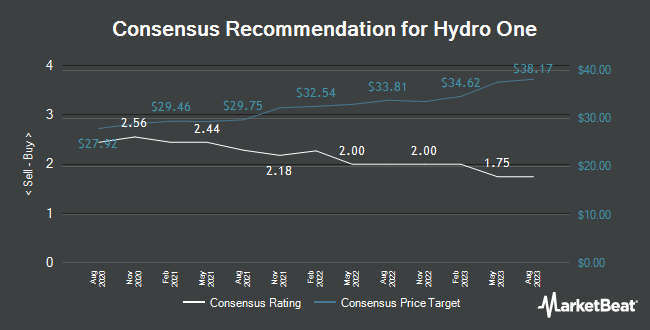