Alzamend Neuro, Inc. (NASDAQ:ALZN – Get Rating) major shareholder Milton C. Ault III purchased 50,000 shares of Alzamend Neuro stock in a transaction that occurred on Monday, April 11th. The stock was acquired at an average price of $1.13 per share, for a total transaction of $56,500.00. Following the transaction, the insider now directly owns 150,000 shares of the company’s stock, valued at approximately $169,500. The acquisition was disclosed in a document filed with the SEC, which is accessible through this hyperlink. Major shareholders that own more than 10% of a company’s shares are required to disclose their transactions with the SEC.

Alzamend Neuro (NASDAQ:ALZN – Get Rating) last posted its quarterly earnings data on Tuesday, March 15th. The company reported ($0.03) earnings per share for the quarter, meeting the Zacks’ consensus estimate of ($0.03). As a group, analysts anticipate that Alzamend Neuro, Inc. will post -0.12 EPS for the current year.

About Alzamend Neuro (Get Rating)

Alzamend Neuro, Inc, an early clinical-stage biopharmaceutical company, focuses on developing various products for the treatment of neurodegenerative diseases and psychiatric disorders. Its pipeline includes AL001, an ionic cocrystal technology delivering a therapeutic combination of lithium, proline, and salicylate for the treatment of Alzheimer's and other neurodegenerative diseases, and psychiatric disorders; and AL002, a method using a mutant-peptide sensitized cell as a cell-based therapeutic vaccine to restore the ability of a patient's immunological system to combat Alzheimer's. 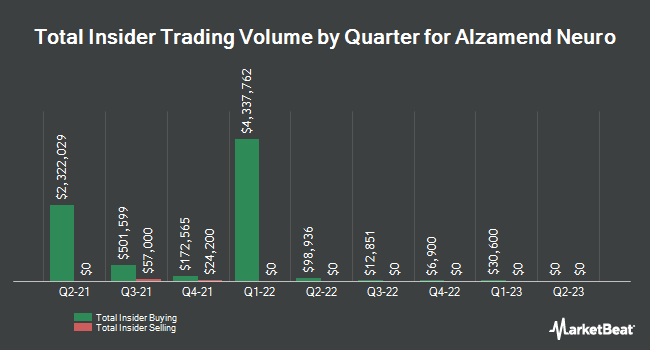 Complete the form below to receive the latest headlines and analysts' recommendations for Alzamend Neuro with our free daily email newsletter: