Shares of Synovus Financial Corp. (NYSE:SNV – Get Rating) have earned an average recommendation of “Buy” from the nine brokerages that are presently covering the stock, MarketBeat reports. One research analyst has rated the stock with a hold rating, seven have assigned a buy rating and one has issued a strong buy rating on the company. The average 1-year price target among analysts that have covered the stock in the last year is $59.50.

In other news, CEO Kevin S. Blair acquired 3,100 shares of the stock in a transaction that occurred on Thursday, February 24th. The shares were acquired at an average cost of $48.49 per share, for a total transaction of $150,319.00. The transaction was disclosed in a legal filing with the SEC, which is accessible through the SEC website. 1.55% of the stock is currently owned by insiders.

Synovus Financial (NYSE:SNV – Get Rating) last announced its quarterly earnings results on Thursday, January 20th. The bank reported $1.35 EPS for the quarter, beating the Zacks’ consensus estimate of $1.10 by $0.25. The business had revenue of $509.38 million during the quarter, compared to analyst estimates of $492.24 million. Synovus Financial had a net margin of 36.15% and a return on equity of 16.18%. During the same quarter in the previous year, the business posted $1.08 EPS. On average, equities analysts predict that Synovus Financial will post 4.48 earnings per share for the current fiscal year.

The business also recently declared a quarterly dividend, which was paid on Friday, April 1st. Investors of record on Thursday, March 17th were issued a $0.34 dividend. This is an increase from Synovus Financial’s previous quarterly dividend of $0.33. This represents a $1.36 dividend on an annualized basis and a dividend yield of 3.04%. The ex-dividend date was Wednesday, March 16th. Synovus Financial’s payout ratio is 27.76%.

About Synovus Financial (Get Rating)

Synovus Financial Corp. is a bank holding company, which engages in the provision of financial services. The company operates through the following segments: Community Banking, Wholesale Banking, and Financial Management Services (FMS). The Community Banking business segment serves customers using a relationship-based approach through its branch, ATM, commercial, and private wealth network in addition to mobile, Internet, and telephone banking. 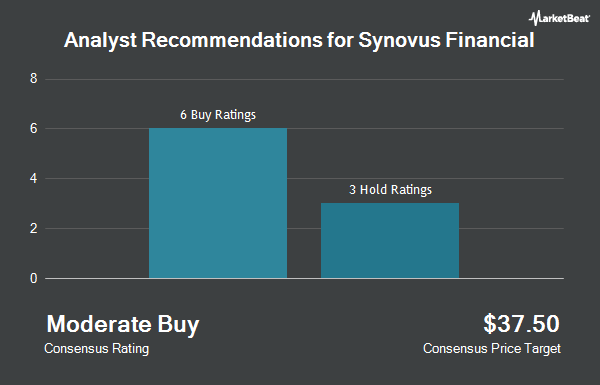