VistaGen Therapeutics (NASDAQ:VTGN – Get Rating) last released its quarterly earnings results on Thursday, February 10th. The company reported ($0.05) earnings per share for the quarter, topping the Zacks’ consensus estimate of ($0.07) by $0.02. VistaGen Therapeutics had a negative return on equity of 44.10% and a negative net margin of 2,465.94%. During the same period in the previous year, the business earned ($0.07) earnings per share.

Separately, Zacks Investment Research raised VistaGen Therapeutics from a “hold” rating to a “buy” rating and set a $1.75 price target for the company in a report on Wednesday, February 16th.

About VistaGen Therapeutics (Get Rating)

VistaGen Therapeutics, Inc, a clinical-stage biopharmaceutical company, engages in developing and commercializing various medicines with the potential to care for anxiety, depression, and other disorders of the central nervous system (CNS). The company's CNS pipeline includes PH94B, a rapid-onset neuroactive nasal spray, which is in preparation for Phase III development for the acute treatment of anxiety in adults with social anxiety disorder. 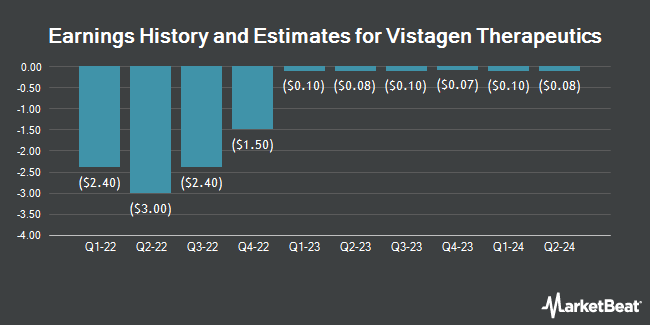 Matador Resources Given Average Rating of “Buy” by Brokerages

Signature Bank Given Average Rating of “Buy” by Brokerages

Livent Co. Given Consensus Rating of “Hold” by Analysts

Bloomin’ Brands, Inc. Given Average Recommendation of “Buy” by Analysts

Dada Nexus Limited Given Consensus Rating of “Buy” by Brokerages

Complete the form below to receive the latest headlines and analysts' recommendations for VistaGen Therapeutics with our free daily email newsletter: