Analysts expect Cardiovascular Systems, Inc. (NASDAQ:CSII – Get Rating) to announce sales of $57.52 million for the current fiscal quarter, according to Zacks. Five analysts have made estimates for Cardiovascular Systems’ earnings. The lowest sales estimate is $54.42 million and the highest is $58.77 million. Cardiovascular Systems reported sales of $63.27 million during the same quarter last year, which indicates a negative year over year growth rate of 9.1%. The company is scheduled to report its next earnings report on Monday, January 1st.

According to Zacks, analysts expect that Cardiovascular Systems will report full-year sales of $237.28 million for the current fiscal year, with estimates ranging from $235.52 million to $240.44 million. For the next fiscal year, analysts anticipate that the business will post sales of $272.21 million, with estimates ranging from $254.67 million to $300.33 million. Zacks Investment Research’s sales averages are an average based on a survey of research firms that follow Cardiovascular Systems.

Cardiovascular Systems (NASDAQ:CSII – Get Rating) last posted its quarterly earnings data on Thursday, February 3rd. The medical device company reported ($0.23) earnings per share for the quarter, missing the Zacks’ consensus estimate of ($0.14) by ($0.09). The company had revenue of $59.14 million for the quarter, compared to analysts’ expectations of $62.66 million. Cardiovascular Systems had a negative return on equity of 10.85% and a negative net margin of 11.47%. The firm’s quarterly revenue was down 7.8% on a year-over-year basis.

Cardiovascular Systems, Inc, a medical device company, develops and commercializes solutions to treat peripheral and coronary artery diseases in the United States and internationally. The company offers peripheral artery disease products, which are catheter-based platforms to treat various plaque types in above and below the knee, including calcified plaque, as well as address various limitations related with surgical, catheter, and pharmacological treatment alternatives; and peripheral support products. 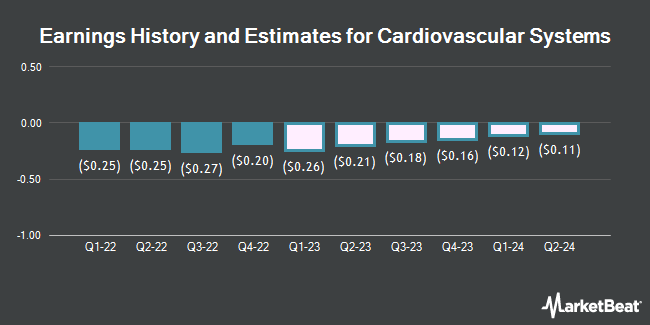 Complete the form below to receive the latest headlines and analysts' recommendations for Cardiovascular Systems with our free daily email newsletter: