Equities research analysts forecast that United Community Banks, Inc. (NASDAQ:UCBI – Get Rating) will report $203.75 million in sales for the current quarter, Zacks reports. Four analysts have issued estimates for United Community Banks’ earnings, with the highest sales estimate coming in at $213.50 million and the lowest estimate coming in at $197.90 million. United Community Banks reported sales of $176.77 million during the same quarter last year, which would suggest a positive year over year growth rate of 15.3%. The firm is scheduled to announce its next earnings report after the market closes on Monday, January 1st.

According to Zacks, analysts expect that United Community Banks will report full year sales of $864.88 million for the current fiscal year, with estimates ranging from $841.50 million to $891.90 million. For the next financial year, analysts expect that the business will post sales of $940.45 million, with estimates ranging from $918.50 million to $984.40 million. Zacks Investment Research’s sales calculations are an average based on a survey of analysts that follow United Community Banks.

United Community Banks (NASDAQ:UCBI – Get Rating) last issued its quarterly earnings data on Tuesday, January 18th. The financial services provider reported $0.64 earnings per share (EPS) for the quarter, missing the Thomson Reuters’ consensus estimate of $0.65 by ($0.01). United Community Banks had a net margin of 36.63% and a return on equity of 13.90%. The business had revenue of $174.73 million for the quarter, compared to analysts’ expectations of $181.57 million. During the same period in the previous year, the business earned $0.68 earnings per share.

The company also recently declared a quarterly dividend, which was paid on Tuesday, April 5th. Stockholders of record on Tuesday, March 15th were given a dividend of $0.21 per share. The ex-dividend date of this dividend was Monday, March 14th. This represents a $0.84 annualized dividend and a dividend yield of 2.65%. This is a positive change from United Community Banks’s previous quarterly dividend of $0.20. United Community Banks’s dividend payout ratio is currently 28.28%.

In other United Community Banks news, CEO H Lynn Harton sold 5,000 shares of the firm’s stock in a transaction dated Friday, April 1st. The shares were sold at an average price of $35.11, for a total value of $175,550.00. The sale was disclosed in a legal filing with the Securities & Exchange Commission, which can be accessed through this hyperlink. 0.62% of the stock is currently owned by company insiders. 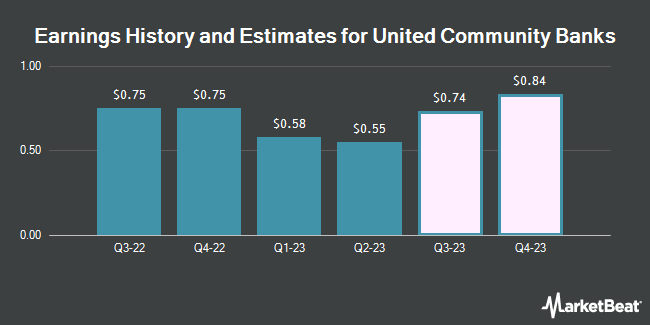 Archer Aviation Inc. Given Consensus Recommendation of “Hold” by Brokerages

Complete the form below to receive the latest headlines and analysts' recommendations for United Community Banks with our free daily email newsletter: