$753.33 Million in Sales Expected for Incyte Co. (NASDAQ:INCY) This Quarter

Analysts predict that Incyte Co. (NASDAQ:INCY – Get Rating) will report sales of $753.33 million for the current fiscal quarter, according to Zacks. Two analysts have provided estimates for Incyte’s earnings, with the lowest sales estimate coming in at $728.45 million and the highest estimate coming in at $778.20 million. Incyte posted sales of $604.72 million in the same quarter last year, which would indicate a positive year-over-year growth rate of 24.6%. The company is expected to issue its next quarterly earnings report on Monday, January 1st.

According to Zacks, analysts expect that Incyte will report full-year sales of $3.41 billion for the current year, with estimates ranging from $3.27 billion to $3.66 billion. For the next financial year, analysts forecast that the company will report sales of $3.98 billion, with estimates ranging from $3.74 billion to $4.36 billion. Zacks’ sales averages are a mean average based on a survey of sell-side research firms that that provide coverage for Incyte.

Incyte (NASDAQ:INCY – Get Rating) last released its earnings results on Tuesday, February 8th. The biopharmaceutical company reported ($0.07) EPS for the quarter, missing the Zacks’ consensus estimate of $0.65 by ($0.72). The business had revenue of $862.50 million for the quarter, compared to the consensus estimate of $813.38 million. Incyte had a return on equity of 14.66% and a net margin of 31.76%. The company’s revenue for the quarter was up 9.4% on a year-over-year basis. During the same quarter in the previous year, the firm earned $0.73 earnings per share.

Several brokerages have recently commented on INCY. Guggenheim cut their price objective on Incyte from $118.00 to $104.00 in a report on Monday, January 3rd. SVB Leerink lowered Incyte from a “market perform” rating to an “underperform” rating and dropped their price objective for the company from $60.00 to $56.00 in a research note on Wednesday, February 9th. StockNews.com started coverage on Incyte in a research note on Thursday, March 31st. They set a “strong-buy” rating for the company. Zacks Investment Research upgraded Incyte from a “sell” rating to a “hold” rating and set a $85.00 target price for the company in a report on Tuesday, April 5th. Finally, Morgan Stanley decreased their price objective on Incyte from $77.00 to $76.00 and set an “equal weight” rating for the company in a report on Wednesday, February 2nd. One investment analyst has rated the stock with a sell rating, four have assigned a hold rating, six have given a buy rating and one has given a strong buy rating to the company’s stock. Based on data from MarketBeat.com, Incyte has a consensus rating of “Buy” and a consensus price target of $87.82.

In other news, EVP Barry P. Flannelly sold 43,993 shares of the firm’s stock in a transaction dated Friday, April 8th. The shares were sold at an average price of $83.49, for a total value of $3,672,975.57. Following the sale, the executive vice president now directly owns 65,163 shares in the company, valued at approximately $5,440,458.87. The transaction was disclosed in a document filed with the Securities & Exchange Commission, which can be accessed through this link. Also, Director Bros. Advisors Lp Baker bought 292,972 shares of the stock in a transaction that occurred on Thursday, February 17th. The stock was bought at an average price of $67.74 per share, with a total value of $19,845,923.28. The disclosure for this purchase can be found here. Insiders purchased a total of 711,335 shares of company stock worth $49,689,821 in the last ninety days. 15.80% of the stock is currently owned by insiders.

Incyte Corp. is a biopharmaceutical company, which engages in the discovery, development and commercialization of proprietary therapeutics. Its portfolio includes compounds in various stages, ranging from preclinical to late stage development, and commercialized products such as JAKAFI (ruxolitinib), and ICLUSIG (ponatinib). 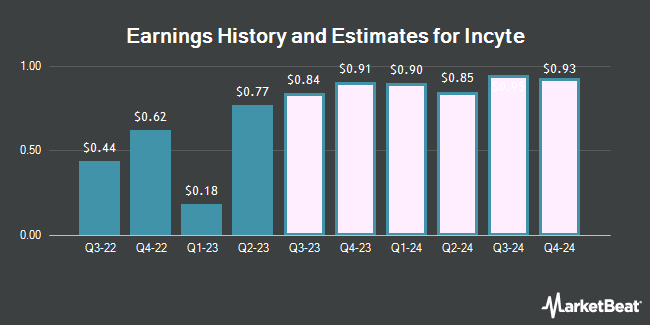 Receive News & Ratings for Incyte Daily - Enter your email address below to receive a concise daily summary of the latest news and analysts' ratings for Incyte and related companies with MarketBeat.com's FREE daily email newsletter.

Complete the form below to receive the latest headlines and analysts' recommendations for Incyte with our free daily email newsletter: