CarMax (NYSE:KMX – Get Rating) last released its quarterly earnings data on Tuesday, April 12th. The company reported $0.98 earnings per share for the quarter, missing analysts’ consensus estimates of $1.34 by ($0.36). CarMax had a net margin of 4.09% and a return on equity of 24.82%. The company had revenue of $7.69 billion for the quarter, compared to analysts’ expectations of $7.58 billion. During the same period last year, the company posted $1.27 EPS. The business’s revenue for the quarter was up 48.8% compared to the same quarter last year. As a group, sell-side analysts anticipate that CarMax will post 7.3 EPS for the current year.

CarMax, Inc, through its subsidiaries, operates as a retailer of used vehicles in the United States. The company operates in two segments, CarMax Sales Operations and CarMax Auto Finance. It offers customers a range of makes and models of used vehicles, including domestic, imported, and luxury vehicles; and extended protection plans to customers at the time of sale, as well as sells vehicles that are approximately 10 years old and has more than 100,000 miles through whole auctions. 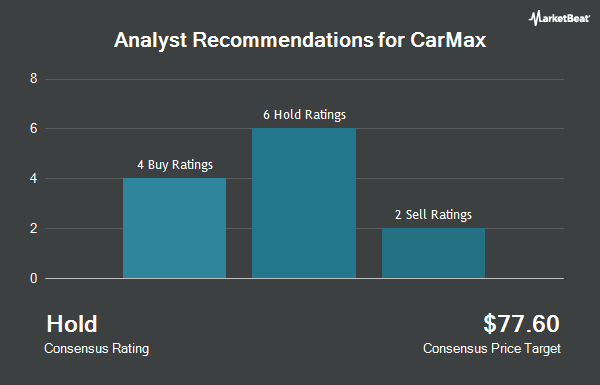 Receive News & Ratings for CarMax Daily - Enter your email address below to receive a concise daily summary of the latest news and analysts' ratings for CarMax and related companies with MarketBeat.com's FREE daily email newsletter.

Invesco International BuyBack Achievers ETF Short Interest Down 72.2% in May

Complete the form below to receive the latest headlines and analysts' recommendations for CarMax with our free daily email newsletter: