Analysts expect WideOpenWest, Inc. (NYSE:WOW – Get Rating) to report $173.78 million in sales for the current fiscal quarter, according to Zacks Investment Research. Four analysts have issued estimates for WideOpenWest’s earnings, with the lowest sales estimate coming in at $172.70 million and the highest estimate coming in at $174.80 million. WideOpenWest reported sales of $286.30 million during the same quarter last year, which indicates a negative year over year growth rate of 39.3%. The firm is scheduled to announce its next earnings report on Monday, January 1st.

According to Zacks, analysts expect that WideOpenWest will report full-year sales of $709.40 million for the current fiscal year, with estimates ranging from $707.70 million to $711.00 million. For the next financial year, analysts anticipate that the firm will report sales of $723.53 million, with estimates ranging from $719.90 million to $726.80 million. Zacks’ sales calculations are an average based on a survey of sell-side research analysts that cover WideOpenWest.

WideOpenWest (NYSE:WOW – Get Rating) last issued its quarterly earnings results on Thursday, February 24th. The company reported ($0.03) earnings per share for the quarter, missing the Zacks’ consensus estimate of $0.10 by ($0.13). The company had revenue of $178.30 million during the quarter, compared to analysts’ expectations of $183.41 million. WideOpenWest had a net margin of 74.52% and a negative return on equity of 27.83%. The company’s quarterly revenue was down 4.7% compared to the same quarter last year. During the same period in the prior year, the business posted $0.04 earnings per share.

WOW has been the topic of a number of research reports. Zacks Investment Research lowered shares of WideOpenWest from a “hold” rating to a “strong sell” rating in a research note on Wednesday, March 2nd. B. Riley increased their price objective on shares of WideOpenWest from $28.00 to $29.00 in a report on Friday, February 25th. One investment analyst has rated the stock with a sell rating, two have assigned a hold rating, five have issued a buy rating and one has assigned a strong buy rating to the company. According to MarketBeat.com, the stock has a consensus rating of “Buy” and an average price target of $24.33.

About WideOpenWest (Get Rating) 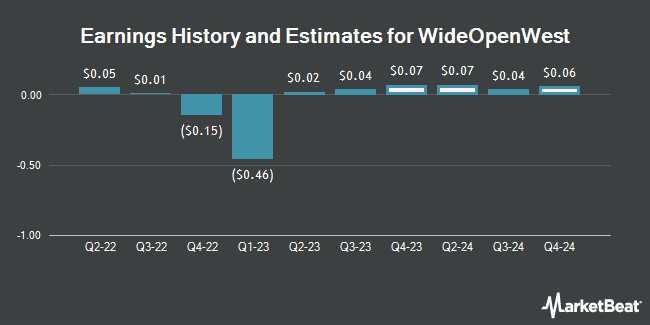 Complete the form below to receive the latest headlines and analysts' recommendations for WideOpenWest with our free daily email newsletter: