CarMax (NYSE:KMX – Get Rating) was downgraded by analysts at TheStreet from a “b-” rating to a “c+” rating in a research note issued on Tuesday, TheStreetRatingsTable reports.

Other research analysts have also issued reports about the company. JPMorgan Chase & Co. lowered CarMax from an “overweight” rating to a “neutral” rating and dropped their target price for the stock from $130.00 to $110.00 in a research report on Wednesday. Citic Securities initiated coverage on CarMax in a research report on Friday, January 28th. They issued a “buy” rating and a $130.00 target price on the stock. StockNews.com started coverage on CarMax in a research report on Thursday, March 31st. They issued a “sell” rating on the stock. Robert W. Baird decreased their price target on CarMax from $140.00 to $120.00 in a research note on Wednesday. Finally, Seaport Res Ptn upgraded CarMax from a “neutral” rating to a “buy” rating in a research note on Thursday, January 27th. Two analysts have rated the stock with a sell rating, four have given a hold rating and eight have issued a buy rating to the company’s stock. According to MarketBeat.com, CarMax has a consensus rating of “Hold” and an average price target of $130.64.

CarMax (NYSE:KMX – Get Rating) last posted its quarterly earnings results on Tuesday, April 12th. The company reported $0.98 earnings per share for the quarter, missing the consensus estimate of $1.34 by ($0.36). CarMax had a net margin of 3.61% and a return on equity of 22.74%. The business had revenue of $7.69 billion for the quarter, compared to analyst estimates of $7.58 billion. During the same period in the previous year, the firm posted $1.27 earnings per share. The firm’s quarterly revenue was up 48.8% on a year-over-year basis. Equities analysts forecast that CarMax will post 6.98 earnings per share for the current year.

CarMax, Inc, through its subsidiaries, operates as a retailer of used vehicles in the United States. The company operates in two segments, CarMax Sales Operations and CarMax Auto Finance. It offers customers a range of makes and models of used vehicles, including domestic, imported, and luxury vehicles; and extended protection plans to customers at the time of sale, as well as sells vehicles that are approximately 10 years old and has more than 100,000 miles through whole auctions. 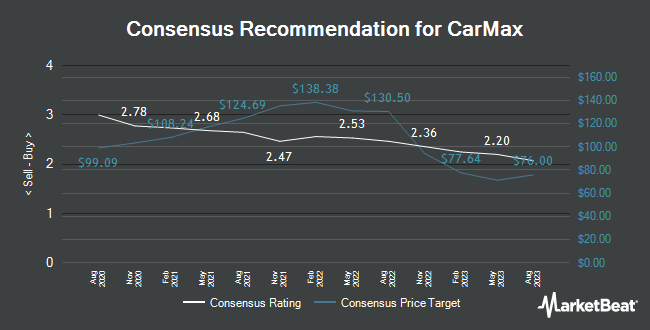 Receive News & Ratings for CarMax Daily - Enter your email address below to receive a concise daily summary of the latest news and analysts' ratings for CarMax and related companies with MarketBeat.com's FREE daily email newsletter.

Complete the form below to receive the latest headlines and analysts' recommendations for CarMax with our free daily email newsletter: