Northcoast Research began coverage on shares of Carvana (NYSE:CVNA – Get Rating) in a report released on Monday, Marketbeat reports. The brokerage issued a neutral rating on the stock.

Carvana (NYSE:CVNA – Get Rating) last issued its quarterly earnings data on Thursday, February 24th. The company reported ($1.02) earnings per share for the quarter, missing the Thomson Reuters’ consensus estimate of ($0.79) by ($0.23). Carvana had a negative return on equity of 19.82% and a negative net margin of 1.05%. The company had revenue of $3.85 billion for the quarter, compared to the consensus estimate of $3.51 billion. During the same period in the previous year, the firm earned ($0.41) earnings per share. The company’s revenue was up 110.9% compared to the same quarter last year. As a group, equities research analysts anticipate that Carvana will post -3.99 earnings per share for the current fiscal year.

In other Carvana news, Director Michael E. Maroone purchased 25,000 shares of Carvana stock in a transaction dated Friday, March 4th. The shares were acquired at an average cost of $104.77 per share, with a total value of $2,619,250.00. The transaction was disclosed in a filing with the Securities & Exchange Commission, which is available at this link. Also, VP Stephen R. Palmer sold 1,000 shares of the company’s stock in a transaction on Tuesday, March 1st. The stock was sold at an average price of $148.73, for a total value of $148,730.00. The disclosure for this sale can be found here. In the last 90 days, insiders have sold 1,026 shares of company stock valued at $153,014. 10.70% of the stock is owned by company insiders. 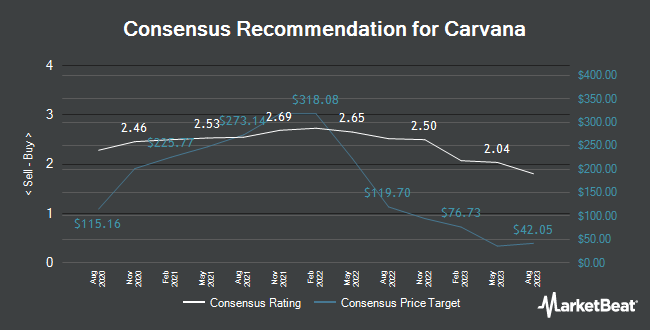