The Goldman Sachs Group assumed coverage on shares of iQIYI (NASDAQ:IQ – Get Rating) in a report released on Sunday, Marketbeat.com reports. The firm issued a hold rating and a $6.20 target price on the stock.

A number of other research firms also recently commented on IQ. HSBC dropped their price objective on iQIYI from $8.10 to $4.80 in a report on Friday, January 14th. Zacks Investment Research downgraded iQIYI from a buy rating to a hold rating in a report on Thursday, March 24th. Benchmark initiated coverage on iQIYI in a report on Tuesday, December 28th. They issued a hold rating on the stock. JPMorgan Chase & Co. cut iQIYI from an overweight rating to an underweight rating and decreased their target price for the stock from $8.00 to $2.00 in a research report on Monday, March 14th. Finally, OTR Global reiterated a negative rating on shares of iQIYI in a report on Monday, January 10th. Two analysts have rated the stock with a sell rating, six have given a hold rating and two have assigned a buy rating to the stock. According to data from MarketBeat, the stock currently has a consensus rating of Hold and a consensus price target of $9.51.

iQIYI, Inc engages in the provision of internet video streaming services. It operates a smart television streaming service and an entertainment-based social media platform, iQIYI Paopao. The firm also also distribute video content through third-party platforms. The company was founded by Yu Gong in November 2009 and is headquartered in Haidan District, China. 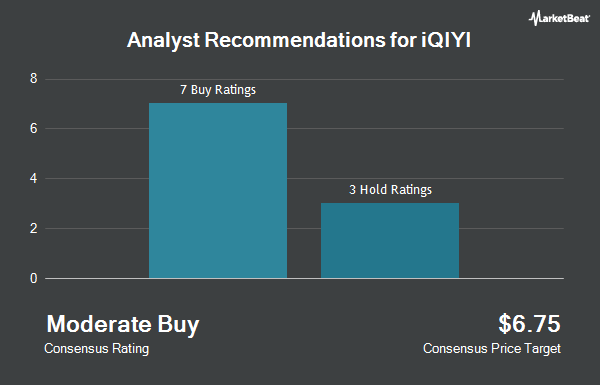 Receive News & Ratings for iQIYI Daily - Enter your email address below to receive a concise daily summary of the latest news and analysts' ratings for iQIYI and related companies with MarketBeat.com's FREE daily email newsletter.

Complete the form below to receive the latest headlines and analysts' recommendations for iQIYI with our free daily email newsletter: