Verint Systems (NASDAQ:VRNT – Get Rating) was downgraded by TheStreet from a “b-” rating to a “c” rating in a research report issued on Tuesday, TheStreetRatingsTable reports.

Verint Systems (NASDAQ:VRNT – Get Rating) last posted its quarterly earnings data on Tuesday, March 29th. The technology company reported $0.57 EPS for the quarter, beating the consensus estimate of $0.55 by $0.02. The business had revenue of $234.17 million for the quarter, compared to the consensus estimate of $231.77 million. Verint Systems had a return on equity of 12.68% and a net margin of 1.65%. Verint Systems’s revenue for the quarter was up 4.0% on a year-over-year basis. During the same quarter in the prior year, the business earned $0.82 earnings per share. As a group, research analysts expect that Verint Systems will post 1.62 EPS for the current fiscal year.

Verint Systems Inc provides customer engagement solutions worldwide. It offers various applications for use in Forecasting and Scheduling, which understands the work needed to meet and exceed customer expectations; Quality and Compliance that uses automation and analytics for customer interactions for attended and self-service channels; Interaction Insights, which extracts insights from structured and unstructured customer interactions and activities; Real-Time Work that supports in-the-moment workforce activities; Self-Service, which connects customers and employees with information, resources, and support; Case Management that helps employees to improve efficiency, time to resolution, compliance, and customer satisfaction; and Knowledge Management, which help agents to deliver stellar service with tools. 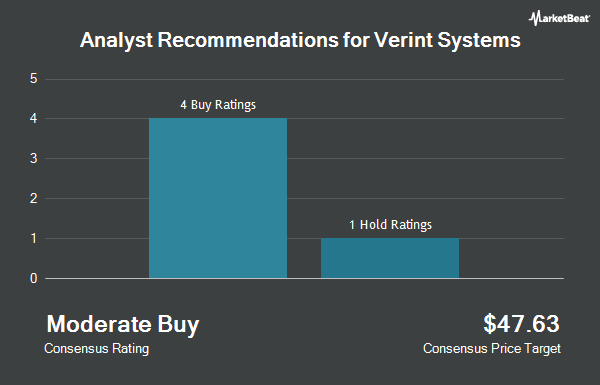 Clene Inc. Given Average Rating of “Buy” by Brokerages

ADMA Biologics, Inc. Given Consensus Recommendation of “Buy” by Analysts

Complete the form below to receive the latest headlines and analysts' recommendations for Verint Systems with our free daily email newsletter: