Union Pacific (NYSE:UNP – Get Rating) is scheduled to post its quarterly earnings results before the market opens on Thursday, April 21st. Analysts expect Union Pacific to post earnings of $2.50 per share for the quarter. Individual that wish to register for the company’s earnings conference call can do so using this link.

Union Pacific (NYSE:UNP – Get Rating) last posted its quarterly earnings data on Thursday, January 20th. The railroad operator reported $2.66 EPS for the quarter, beating the Thomson Reuters’ consensus estimate of $2.60 by $0.06. Union Pacific had a net margin of 29.92% and a return on equity of 44.50%. The business had revenue of $5.73 billion during the quarter, compared to analyst estimates of $5.61 billion. During the same quarter last year, the firm posted $2.36 earnings per share. The business’s revenue for the quarter was up 11.5% compared to the same quarter last year. On average, analysts expect Union Pacific to post $12 EPS for the current fiscal year and $13 EPS for the next fiscal year.

Union Pacific declared that its Board of Directors has initiated a share repurchase program on Thursday, February 3rd that permits the company to repurchase 100,000,000 shares. This repurchase authorization permits the railroad operator to reacquire shares of its stock through open market purchases. Stock repurchase programs are usually a sign that the company’s leadership believes its shares are undervalued.

The firm also recently disclosed a quarterly dividend, which was paid on Thursday, March 31st. Stockholders of record on Monday, February 28th were paid a $1.18 dividend. This represents a $4.72 annualized dividend and a dividend yield of 1.93%. The ex-dividend date of this dividend was Friday, February 25th. Union Pacific’s payout ratio is 47.44%.

About Union Pacific (Get Rating) 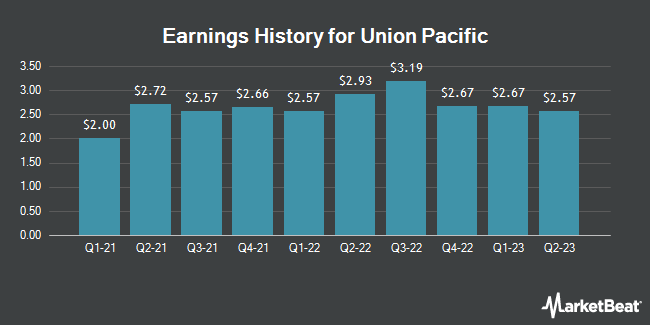 Aperam S.A. Given Average Rating of “Hold” by Analysts

Flughafen Zürich AG Given Average Recommendation of “Hold” by Brokerages

Complete the form below to receive the latest headlines and analysts' recommendations for Union Pacific with our free daily email newsletter: