Vertex Pharmaceuticals (NASDAQ:VRTX – Get Rating) last released its quarterly earnings data on Wednesday, January 26th. The pharmaceutical company reported $3.18 earnings per share (EPS) for the quarter, topping the Zacks’ consensus estimate of $2.91 by $0.27. Vertex Pharmaceuticals had a return on equity of 32.33% and a net margin of 30.92%. The business had revenue of $2.07 billion for the quarter, compared to the consensus estimate of $1.99 billion. During the same quarter in the previous year, the company posted $2.22 EPS.

Vertex Pharmaceuticals Incorporated, a biotechnology company, engages in developing and commercializing therapies for treating cystic fibrosis. The company markets SYMDEKO/SYMKEVI, ORKAMBI, and KALYDECO to treat patients with cystic fibrosis who have specific mutations in their cystic fibrosis transmembrane conductance regulator gene; and TRIKAFTA for the treatment of patients with CF 6 years of age or older who have at least one F508del mutation. 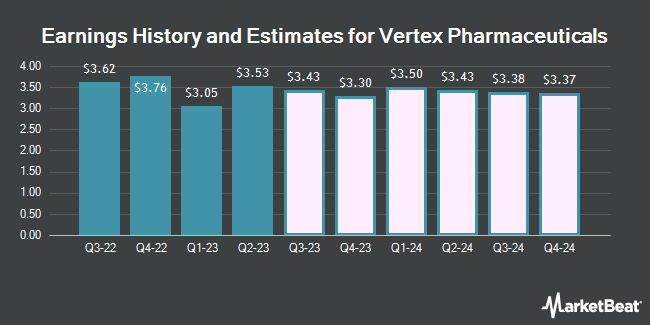 Complete the form below to receive the latest headlines and analysts' recommendations for Vertex Pharmaceuticals with our free daily email newsletter: