Imperial Oil (NYSEAMERICAN:IMO – Get Rating) (TSE:IMO) had its price target hoisted by CIBC from C$60.00 to C$70.00 in a research report sent to investors on Thursday morning, The Fly reports.

Imperial Oil (NYSEAMERICAN:IMO – Get Rating) (TSE:IMO) last issued its quarterly earnings data on Tuesday, February 1st. The energy company reported $0.94 earnings per share (EPS) for the quarter, missing the Thomson Reuters’ consensus estimate of $1.07 by ($0.13). The business had revenue of $12.31 billion for the quarter, compared to analyst estimates of $10.82 billion. Imperial Oil had a return on equity of 8.06% and a net margin of 1.81%. The business’s quarterly revenue was up 104.1% on a year-over-year basis. During the same quarter in the prior year, the firm posted ($1.56) earnings per share. Equities research analysts anticipate that Imperial Oil will post 2.92 EPS for the current year.

The company also recently announced a quarterly dividend, which was paid on Friday, April 1st. Shareholders of record on Thursday, March 3rd were paid a dividend of $0.2673 per share. This is an increase from Imperial Oil’s previous quarterly dividend of $0.22. This represents a $1.07 annualized dividend and a yield of 2.10%. The ex-dividend date was Wednesday, March 2nd. Imperial Oil’s payout ratio is 164.62%.

About Imperial Oil (Get Rating) 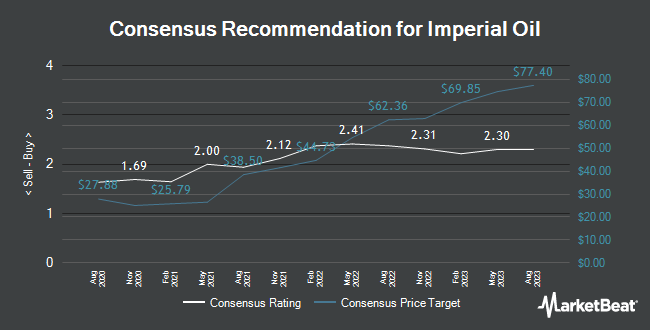