Shares of Consolidated Edison, Inc. (NYSE:ED – Get Rating) have earned an average rating of “Hold” from the fourteen ratings firms that are presently covering the stock, Marketbeat reports. Seven equities research analysts have rated the stock with a sell recommendation, four have given a hold recommendation and two have given a buy recommendation to the company. The average twelve-month target price among analysts that have issued ratings on the stock in the last year is $79.42.

Consolidated Edison (NYSE:ED – Get Rating) last announced its quarterly earnings data on Thursday, February 17th. The utilities provider reported $1.00 earnings per share for the quarter, topping the Thomson Reuters’ consensus estimate of $0.85 by $0.15. The company had revenue of $3.42 billion during the quarter, compared to analyst estimates of $2.97 billion. Consolidated Edison had a net margin of 9.84% and a return on equity of 7.63%. During the same period last year, the business earned $0.75 EPS. On average, sell-side analysts expect that Consolidated Edison will post 4.47 EPS for the current year.

The company also recently disclosed a quarterly dividend, which was paid on Tuesday, March 15th. Investors of record on Wednesday, February 16th were given a $0.79 dividend. The ex-dividend date was Tuesday, February 15th. This is an increase from Consolidated Edison’s previous quarterly dividend of $0.78. This represents a $3.16 annualized dividend and a yield of 3.22%. Consolidated Edison’s dividend payout ratio (DPR) is currently 82.08%.

In other Consolidated Edison news, Director John Mcavoy sold 74,715 shares of the business’s stock in a transaction dated Tuesday, February 22nd. The shares were sold at an average price of $84.69, for a total transaction of $6,327,613.35. The transaction was disclosed in a filing with the SEC, which is available through the SEC website. Over the last quarter, insiders purchased 512 shares of company stock worth $46,801. 0.17% of the stock is currently owned by insiders.

About Consolidated Edison (Get Rating) 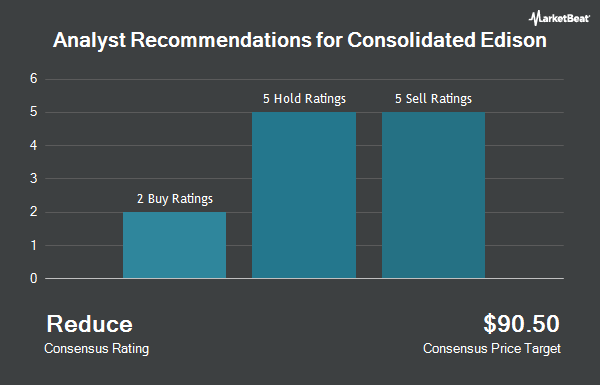