StockNews.com lowered shares of Landstar System (NASDAQ:LSTR – Get Rating) from a buy rating to a hold rating in a research report sent to investors on Thursday.

Landstar System (NASDAQ:LSTR – Get Rating) last announced its earnings results on Wednesday, January 26th. The transportation company reported $2.99 earnings per share for the quarter, topping the Thomson Reuters’ consensus estimate of $2.85 by $0.14. Landstar System had a return on equity of 45.49% and a net margin of 5.84%. The firm had revenue of $1.95 billion for the quarter, compared to the consensus estimate of $1.86 billion. During the same period in the previous year, the business earned $2.01 EPS. The firm’s revenue for the quarter was up 50.0% on a year-over-year basis. As a group, equities research analysts anticipate that Landstar System will post 10.74 earnings per share for the current year.

The firm also recently declared a quarterly dividend, which was paid on Friday, March 11th. Investors of record on Monday, February 14th were issued a $0.25 dividend. The ex-dividend date was Friday, February 11th. This represents a $1.00 dividend on an annualized basis and a yield of 0.69%. Landstar System’s payout ratio is 10.02%.

In other Landstar System news, Director Dr. Homaira Akbari purchased 2,000 shares of Landstar System stock in a transaction that occurred on Thursday, February 24th. The stock was bought at an average price of $151.30 per share, with a total value of $302,600.00. The acquisition was disclosed in a filing with the SEC, which is available at the SEC website. Corporate insiders own 0.70% of the company’s stock.

About Landstar System (Get Rating) 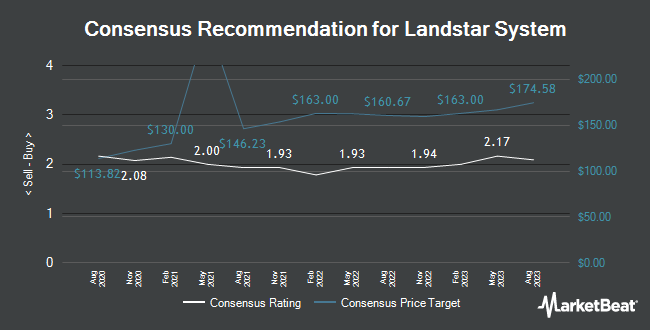 Complete the form below to receive the latest headlines and analysts' recommendations for Landstar System with our free daily email newsletter: