$1.15 Billion in Sales Expected for Qorvo, Inc. (NASDAQ:QRVO) This Quarter

Brokerages expect that Qorvo, Inc. (NASDAQ:QRVO – Get Rating) will post sales of $1.15 billion for the current quarter, Zacks reports. Five analysts have made estimates for Qorvo’s earnings. Qorvo reported sales of $1.07 billion in the same quarter last year, which would suggest a positive year over year growth rate of 7.5%. The business is expected to report its next quarterly earnings results on Monday, January 1st.

On average, analysts expect that Qorvo will report full-year sales of $4.63 billion for the current year. For the next fiscal year, analysts expect that the firm will post sales of $4.97 billion, with estimates ranging from $4.81 billion to $5.16 billion. Zacks Investment Research’s sales averages are an average based on a survey of analysts that that provide coverage for Qorvo.

Qorvo (NASDAQ:QRVO – Get Rating) last released its earnings results on Wednesday, February 2nd. The semiconductor company reported $2.81 earnings per share (EPS) for the quarter, beating analysts’ consensus estimates of $2.53 by $0.28. The company had revenue of $1.11 billion for the quarter, compared to the consensus estimate of $1.11 billion. Qorvo had a net margin of 24.60% and a return on equity of 27.27%. The company’s revenue was up 1.8% compared to the same quarter last year. During the same period in the prior year, the company posted $2.95 EPS.

In other news, VP Paul J. Fego sold 861 shares of the firm’s stock in a transaction on Tuesday, February 15th. The stock was sold at an average price of $131.78, for a total transaction of $113,462.58. The sale was disclosed in a document filed with the Securities & Exchange Commission, which can be accessed through this link. Company insiders own 0.52% of the company’s stock. 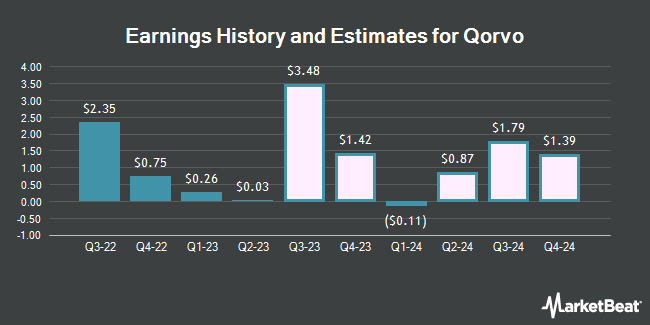