Equities analysts expect Kiniksa Pharmaceuticals, Ltd. (NASDAQ:KNSA – Get Rating) to announce sales of $31.93 million for the current quarter, according to Zacks Investment Research. Two analysts have made estimates for Kiniksa Pharmaceuticals’ earnings, with the highest sales estimate coming in at $42.89 million and the lowest estimate coming in at $20.96 million. The company is expected to issue its next earnings results on Monday, January 1st.

According to Zacks, analysts expect that Kiniksa Pharmaceuticals will report full-year sales of $119.15 million for the current financial year, with estimates ranging from $114.54 million to $123.76 million. For the next financial year, analysts anticipate that the business will post sales of $211.82 million, with estimates ranging from $199.05 million to $224.59 million. Zacks’ sales calculations are an average based on a survey of research firms that follow Kiniksa Pharmaceuticals.

Kiniksa Pharmaceuticals (NASDAQ:KNSA – Get Rating) last issued its quarterly earnings results on Tuesday, February 22nd. The company reported ($0.53) earnings per share for the quarter, missing the Zacks’ consensus estimate of ($0.44) by ($0.09). The company had revenue of $18.75 million during the quarter, compared to analysts’ expectations of $16.32 million.

Several equities research analysts recently weighed in on the company. Zacks Investment Research lowered Kiniksa Pharmaceuticals from a “buy” rating to a “hold” rating in a report on Thursday, February 24th. Bank of America dropped their price target on Kiniksa Pharmaceuticals from $37.00 to $34.00 and set a “buy” rating on the stock in a research report on Wednesday, December 29th.

About Kiniksa Pharmaceuticals (Get Rating)

Kiniksa Pharmaceuticals, Ltd., a biopharmaceutical company, focuses on discovering, acquiring, developing, and commercializing therapeutic medicines for patients suffering from debilitating diseases with significant unmet medical needs worldwide. Its product candidates include ARCALYST, an interleukin-1alpha and interleukin-1beta, for the treatment of recurrent pericarditis, which is an inflammatory cardiovascular disease; Mavrilimumab, a monoclonal antibody inhibitor that completed Phase II clinical trials for the treatment of giant cell arteritis; Vixarelimab, a monoclonal antibody, which is in Phase 2a clinical trial for the treatment of prurigo nodularis, a chronic inflammatory skin condition; and KPL-404, a monoclonal antibody inhibitor of the CD40- CD154 interaction, a T-cell co-stimulatory signal critical for B-cell maturation, immunoglobulin class switching, and type 1 immune response. 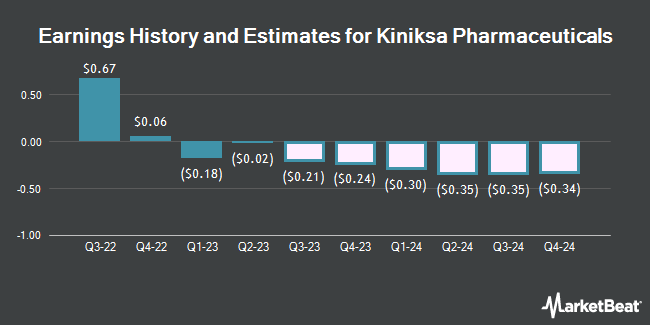 Superior Plus PT Raised to C$14.00 at Canaccord Genuity Group

Complete the form below to receive the latest headlines and analysts' recommendations for Kiniksa Pharmaceuticals with our free daily email newsletter: