Wall Street brokerages expect Xenon Pharmaceuticals Inc. (NASDAQ:XENE – Get Rating) to announce $9.22 million in sales for the current quarter, according to Zacks. Five analysts have made estimates for Xenon Pharmaceuticals’ earnings, with the lowest sales estimate coming in at $6.75 million and the highest estimate coming in at $15.00 million. Xenon Pharmaceuticals reported sales of $4.36 million in the same quarter last year, which would suggest a positive year-over-year growth rate of 111.5%. The firm is expected to issue its next earnings report on Monday, January 1st.

On average, analysts expect that Xenon Pharmaceuticals will report full-year sales of $22.02 million for the current financial year, with estimates ranging from $6.80 million to $57.50 million. For the next financial year, analysts forecast that the company will post sales of $28.00 million, with estimates ranging from $16.00 million to $40.00 million. Zacks’ sales averages are an average based on a survey of research firms that cover Xenon Pharmaceuticals.

Xenon Pharmaceuticals (NASDAQ:XENE – Get Rating) last announced its quarterly earnings data on Tuesday, March 1st. The biopharmaceutical company reported ($0.57) EPS for the quarter, missing the Zacks’ consensus estimate of ($0.47) by ($0.10). The business had revenue of $3.74 million during the quarter, compared to the consensus estimate of $4.20 million. Xenon Pharmaceuticals had a negative return on equity of 24.14% and a negative net margin of 425.88%. During the same period in the prior year, the firm earned ($0.34) EPS.

Xenon Pharmaceuticals Inc, a clinical-stage biopharmaceutical company, engages in developing therapeutics to treat patients with neurological disorders in Canada. Its clinical development pipeline includes XEN496, A Kv7 potassium channel opener that is Phase III clinical trials for the treatment of KCNQ2 developmental and epilepsy encephalopathy; and XEN1101, A Kv7 potassium channel opener, which is in Phase II clinical trial for the treatment of epilepsy and other neurological disorders. 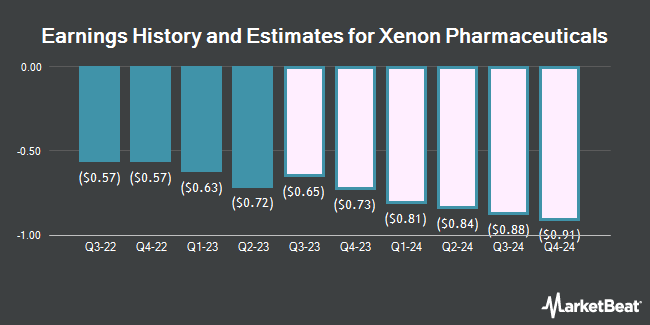 Complete the form below to receive the latest headlines and analysts' recommendations for Xenon Pharmaceuticals with our free daily email newsletter: