AirBoss of America Corp. (TSE:BOS) Given Average Recommendation of “Buy” by Analysts

Shares of AirBoss of America Corp. (TSE:BOS – Get Rating) have been assigned a consensus recommendation of “Buy” from the six brokerages that are covering the stock, Marketbeat reports. Five investment analysts have rated the stock with a buy recommendation. The average 1 year price target among analysts that have issued ratings on the stock in the last year is C$54.00.

AirBoss of America (TSE:BOS – Get Rating) last issued its quarterly earnings results on Tuesday, March 8th. The company reported C$0.71 earnings per share for the quarter, beating analysts’ consensus estimates of C$0.51 by C$0.20. The business had revenue of C$313.99 million for the quarter, compared to analysts’ expectations of C$301.86 million. On average, equities research analysts forecast that AirBoss of America will post 2.8399999 EPS for the current fiscal year.

The firm also recently declared a quarterly dividend, which was paid on Friday, April 15th. Investors of record on Thursday, March 31st were issued a dividend of $0.10 per share. This represents a $0.40 dividend on an annualized basis and a yield of 1.18%. The ex-dividend date was Wednesday, March 30th. AirBoss of America’s payout ratio is currently 14.12%.

In other AirBoss of America news, Director Peter Grenville Schoch purchased 5,000 shares of the company’s stock in a transaction dated Thursday, March 10th. The stock was bought at an average cost of C$32.10 per share, for a total transaction of C$160,500.00. Following the completion of the transaction, the director now owns 4,799,077 shares in the company, valued at C$154,050,371.70.

About AirBoss of America (Get Rating)

AirBoss of America Corp., together with its subsidiaries, develops, manufactures, and markets rubber-based products for automotive, heavy commercial, construction and infrastructure, oil and gas, and defense industries in Canada, the United States, and internationally. It operates through three segments: AirBoss Defense Group, Rubber Solutions, and Engineered Products. 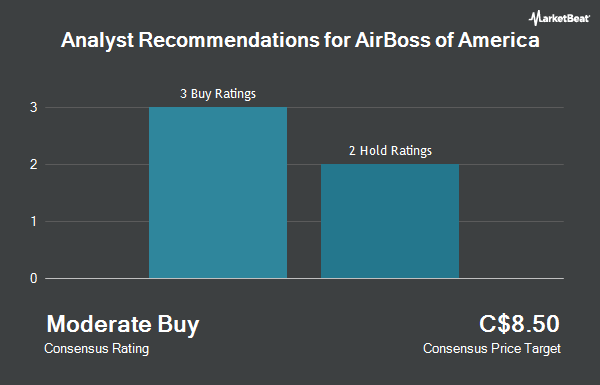 Absci vs. The Competition Critical Contrast

Complete the form below to receive the latest headlines and analysts' recommendations for AirBoss of America with our free daily email newsletter: