Wall Street analysts predict that FS KKR Capital Corp. (NYSE:FSK – Get Rating) will post $0.64 earnings per share (EPS) for the current fiscal quarter, according to Zacks. Three analysts have made estimates for FS KKR Capital’s earnings. FS KKR Capital posted earnings per share of $0.63 in the same quarter last year, which would indicate a positive year-over-year growth rate of 1.6%. The business is scheduled to issue its next earnings results after the market closes on Monday, January 1st.

On average, analysts expect that FS KKR Capital will report full-year earnings of $2.58 per share for the current year, with EPS estimates ranging from $2.54 to $2.63. For the next financial year, analysts expect that the business will post earnings of $2.57 per share, with EPS estimates ranging from $2.47 to $2.70. Zacks Investment Research’s EPS averages are a mean average based on a survey of research analysts that that provide coverage for FS KKR Capital.

Several analysts recently commented on FSK shares. Zacks Investment Research raised FS KKR Capital from a “hold” rating to a “buy” rating and set a $26.00 price objective for the company in a report on Thursday, March 3rd. Wells Fargo & Company upgraded FS KKR Capital from an “underweight” rating to an “equal weight” rating and lifted their target price for the company from $19.50 to $21.50 in a research report on Wednesday, March 2nd.

The business also recently announced a quarterly dividend, which was paid on Monday, April 4th. Investors of record on Wednesday, March 16th were given a dividend of $0.63 per share. The ex-dividend date of this dividend was Tuesday, March 15th. This is an increase from FS KKR Capital’s previous quarterly dividend of $0.62. This represents a $2.52 annualized dividend and a yield of 11.05%. FS KKR Capital’s payout ratio is 28.16%.

FS KKR Capital Corp. is a business development company specializing in investments in debt securities. It invest primarily in the senior secured debt and, to a lesser extent, the subordinated debt of private middle market U.S. companies. It seeks to purchase interests in loans through secondary market transactions or directly from the target companies as primary market investments. 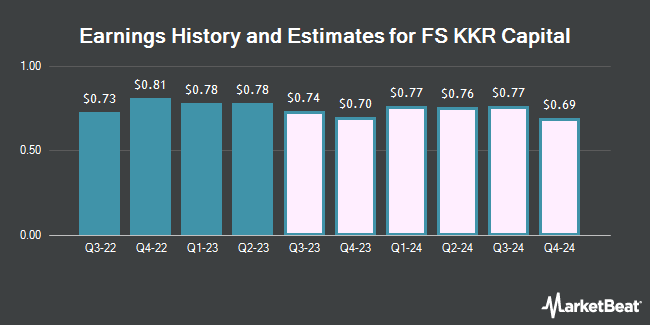 $0.29 Earnings Per Share Expected for Eastern Bankshares, Inc. This Quarter

Complete the form below to receive the latest headlines and analysts' recommendations for FS KKR Capital with our free daily email newsletter: