Algonquin Power & Utilities Corp. (NYSE:AQN – Get Rating) has received an average recommendation of “Hold” from the twelve ratings firms that are currently covering the company, Marketbeat.com reports. One equities research analyst has rated the stock with a sell rating, four have issued a hold rating and six have assigned a buy rating to the company. The average twelve-month target price among analysts that have updated their coverage on the stock in the last year is $16.78.

The firm also recently announced a quarterly dividend, which was paid on Thursday, April 14th. Investors of record on Thursday, March 31st were paid a dividend of $0.1706 per share. The ex-dividend date of this dividend was Wednesday, March 30th. This represents a $0.68 annualized dividend and a yield of 4.37%. Algonquin Power & Utilities’s dividend payout ratio is currently 170.00%.

Algonquin Power & Utilities Corp., through its subsidiaries, owns and operates a portfolio of regulated and non-regulated generation, distribution, and transmission utility assets in Canada, the United States, Chile, and Bermuda. It generates and sells electrical energy through renewable and clean energy power generation facilities. 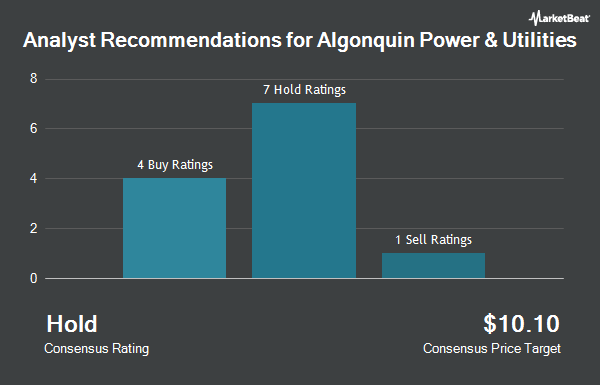 Lennar Upgraded to “Buy” by StockNews.com

Walmart Downgraded by StockNews.com to “Buy”

Complete the form below to receive the latest headlines and analysts' recommendations for Algonquin Power & Utilities with our free daily email newsletter: