Shares of FibroGen, Inc. (NASDAQ:FGEN – Get Rating) have been assigned an average rating of “Hold” from the nine research firms that are currently covering the firm, Marketbeat Ratings reports. One investment analyst has rated the stock with a sell recommendation, seven have issued a hold recommendation and one has assigned a buy recommendation to the company. The average 12 month price target among brokerages that have issued a report on the stock in the last year is $21.83.

Several research firms have recently weighed in on FGEN. StockNews.com began coverage on FibroGen in a report on Thursday, March 31st. They issued a “hold” rating for the company. Zacks Investment Research raised FibroGen from a “strong sell” rating to a “hold” rating in a report on Thursday, March 3rd. Finally, The Goldman Sachs Group dropped their price objective on shares of FibroGen from $10.00 to $9.00 and set a “sell” rating on the stock in a research note on Tuesday, March 1st.

FibroGen (NASDAQ:FGEN – Get Rating) last posted its quarterly earnings data on Monday, February 28th. The biopharmaceutical company reported ($1.45) earnings per share for the quarter, missing the Thomson Reuters’ consensus estimate of ($0.68) by ($0.77). The firm had revenue of $16.54 million during the quarter, compared to analyst estimates of $47.65 million. FibroGen had a negative net margin of 123.25% and a negative return on equity of 93.23%. FibroGen’s revenue was down 74.5% compared to the same quarter last year. During the same period in the previous year, the company posted ($0.64) earnings per share. On average, research analysts expect that FibroGen will post -3.17 EPS for the current year.

About FibroGen (Get Rating)

FibroGen, Inc, a biopharmaceutical company, discovers, develops, and commercializes therapeutics to treat serious unmet medical needs. The company is developing Roxadustat, an oral small molecule inhibitor of hypoxia inducible factor prolyl hydroxylases, which has completed Phase III clinical development for the treatment of anemia in chronic kidney disease in the United States, Europe, China, and Japan; and in Phase II/III development in China for anemia associated with myelodysplastic syndromes. 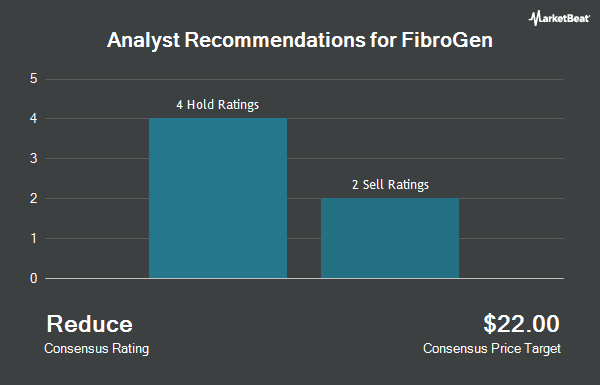 Receive News & Ratings for FibroGen Daily - Enter your email address below to receive a concise daily summary of the latest news and analysts' ratings for FibroGen and related companies with MarketBeat.com's FREE daily email newsletter.

Complete the form below to receive the latest headlines and analysts' recommendations for FibroGen with our free daily email newsletter: