Shares of Essent Group Ltd. (NYSE:ESNT – Get Rating) have earned an average rating of “Buy” from the ten research firms that are currently covering the company, Marketbeat.com reports. One investment analyst has rated the stock with a hold rating and eight have assigned a buy rating to the company. The average 1-year price target among brokers that have updated their coverage on the stock in the last year is $55.44.

In other Essent Group news, Director Robert Glanville acquired 1,000 shares of the stock in a transaction on Wednesday, March 9th. The shares were bought at an average price of $40.71 per share, with a total value of $40,710.00. The acquisition was disclosed in a legal filing with the SEC, which is available at this link. 2.90% of the stock is currently owned by insiders.

Essent Group (NYSE:ESNT – Get Rating) last posted its earnings results on Friday, February 11th. The financial services provider reported $1.64 EPS for the quarter, beating the Zacks’ consensus estimate of $1.45 by $0.19. The firm had revenue of $256.90 million for the quarter, compared to the consensus estimate of $240.66 million. Essent Group had a net margin of 66.29% and a return on equity of 16.62%. The company’s revenue was up 3.9% on a year-over-year basis. During the same period last year, the firm posted $1.10 EPS. As a group, equities analysts expect that Essent Group will post 6.54 earnings per share for the current year.

The firm also recently disclosed a quarterly dividend, which was paid on Monday, March 21st. Shareholders of record on Thursday, March 10th were issued a $0.20 dividend. This represents a $0.80 dividend on an annualized basis and a yield of 1.92%. The ex-dividend date of this dividend was Wednesday, March 9th. This is a positive change from Essent Group’s previous quarterly dividend of $0.19. Essent Group’s payout ratio is currently 13.09%. 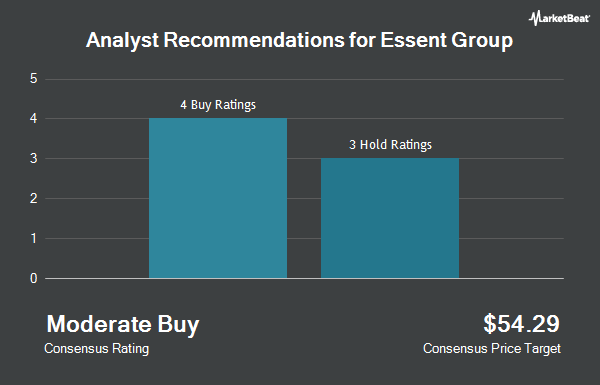