Brokerages predict that Health Catalyst, Inc. (NASDAQ:HCAT – Get Rating) will announce $65.88 million in sales for the current quarter, according to Zacks. Six analysts have issued estimates for Health Catalyst’s earnings, with the highest sales estimate coming in at $66.77 million and the lowest estimate coming in at $65.11 million. Health Catalyst reported sales of $55.85 million in the same quarter last year, which indicates a positive year-over-year growth rate of 18%. The business is expected to announce its next quarterly earnings results on Monday, January 1st.

According to Zacks, analysts expect that Health Catalyst will report full year sales of $290.59 million for the current fiscal year, with estimates ranging from $290.00 million to $291.49 million. For the next fiscal year, analysts expect that the company will post sales of $348.69 million, with estimates ranging from $344.68 million to $352.12 million. Zacks’ sales averages are an average based on a survey of sell-side research analysts that cover Health Catalyst.

Health Catalyst (NASDAQ:HCAT – Get Rating) last released its quarterly earnings results on Tuesday, March 1st. The company reported ($0.19) earnings per share for the quarter, beating the Thomson Reuters’ consensus estimate of ($0.21) by $0.02. The firm had revenue of $64.72 million for the quarter, compared to analysts’ expectations of $63.17 million. Health Catalyst had a negative net margin of 63.33% and a negative return on equity of 21.30%. The business’s revenue was up 21.5% on a year-over-year basis. During the same period in the prior year, the firm earned ($0.41) EPS.

About Health Catalyst (Get Rating)

Health Catalyst, Inc provides data and analytics technology and services to healthcare organizations. Its solutions include a cloud-based data platform, analytics software, and professional services. The company was formerly known as HQC Holdings, Inc and changed its name to Health Catalyst, Inc in March 2017. 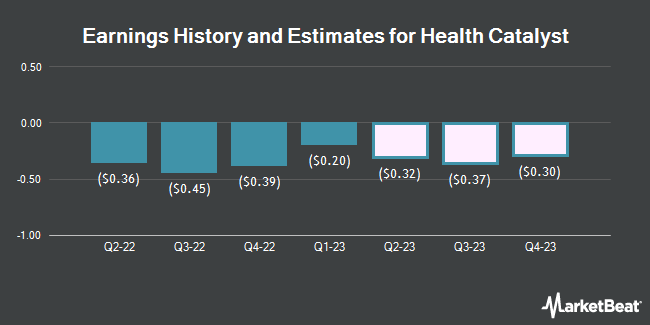 Complete the form below to receive the latest headlines and analysts' recommendations for Health Catalyst with our free daily email newsletter: