Wall Street analysts expect that James River Group Holdings, Ltd. (NASDAQ:JRVR – Get Rating) will announce sales of $203.05 million for the current fiscal quarter, according to Zacks Investment Research. Two analysts have made estimates for James River Group’s earnings, with the lowest sales estimate coming in at $198.40 million and the highest estimate coming in at $207.70 million. James River Group reported sales of $182.98 million in the same quarter last year, which would suggest a positive year over year growth rate of 11%. The company is expected to announce its next quarterly earnings results after the market closes on Monday, January 1st.

According to Zacks, analysts expect that James River Group will report full-year sales of $819.05 million for the current financial year, with estimates ranging from $791.50 million to $846.60 million. For the next year, analysts anticipate that the business will report sales of $863.25 million, with estimates ranging from $814.50 million to $912.00 million. Zacks Investment Research’s sales calculations are a mean average based on a survey of analysts that cover James River Group.

James River Group (NASDAQ:JRVR – Get Rating) last posted its quarterly earnings data on Monday, February 28th. The insurance provider reported ($1.81) EPS for the quarter, missing the consensus estimate of $0.46 by ($2.27). James River Group had a negative net margin of 22.36% and a negative return on equity of 24.27%. The firm had revenue of $207.34 million during the quarter, compared to analysts’ expectations of $198.57 million. During the same quarter in the previous year, the company posted ($0.95) EPS. James River Group’s revenue for the quarter was up 6.8% on a year-over-year basis.

The firm also recently disclosed a quarterly dividend, which was paid on Thursday, March 31st. Investors of record on Monday, March 14th were given a $0.05 dividend. The ex-dividend date of this dividend was Friday, March 11th. This represents a $0.20 dividend on an annualized basis and a dividend yield of 0.82%. James River Group’s dividend payout ratio (DPR) is presently -3.85%.

About James River Group (Get Rating)

James River Group Holdings, Ltd., through its subsidiaries, provides specialty insurance and reinsurance services in the United States. It operates through Excess and Surplus Lines, Specialty Admitted Insurance, and Casualty Reinsurance segments. The Excess and Surplus Lines segment underwrites liability and property insurance on an excess and surplus commercial lines basis in all states and the District of Columbia. 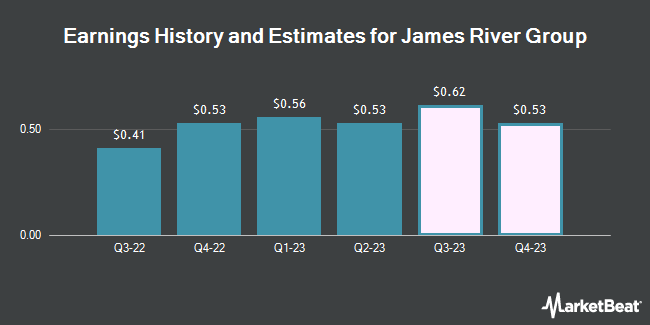 Complete the form below to receive the latest headlines and analysts' recommendations for James River Group with our free daily email newsletter: