$76.67 Million in Sales Expected for Camtek Ltd. (NASDAQ:CAMT) This Quarter

Equities research analysts expect Camtek Ltd. (NASDAQ:CAMT – Get Rating) to announce sales of $76.67 million for the current quarter, Zacks Investment Research reports. Three analysts have made estimates for Camtek’s earnings, with the lowest sales estimate coming in at $76.00 million and the highest estimate coming in at $77.00 million. Camtek reported sales of $57.35 million during the same quarter last year, which indicates a positive year over year growth rate of 33.7%. The firm is scheduled to report its next quarterly earnings results on Monday, January 1st.

On average, analysts expect that Camtek will report full year sales of $312.53 million for the current year, with estimates ranging from $308.00 million to $315.60 million. For the next year, analysts forecast that the firm will post sales of $332.85 million, with estimates ranging from $330.00 million to $335.70 million. Zacks Investment Research’s sales averages are an average based on a survey of research analysts that that provide coverage for Camtek.

Camtek (NASDAQ:CAMT – Get Rating) last issued its earnings results on Thursday, February 10th. The semiconductor company reported $0.39 EPS for the quarter, hitting analysts’ consensus estimates of $0.39. The company had revenue of $74.17 million for the quarter, compared to analysts’ expectations of $72.63 million. Camtek had a net margin of 22.35% and a return on equity of 24.42%. The firm’s revenue was up 52.6% compared to the same quarter last year. During the same quarter last year, the company earned $0.18 EPS. 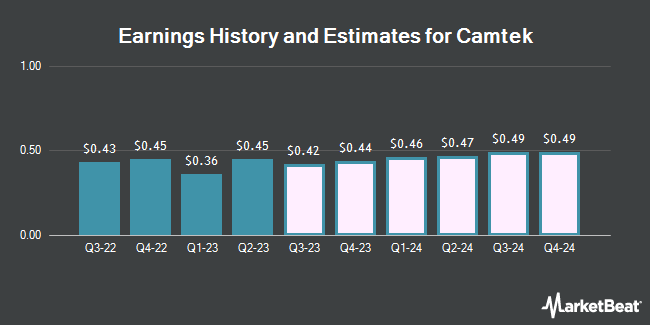