Equities analysts expect that Associated Banc-Corp (NYSE:ASB – Get Rating) will announce $0.37 earnings per share for the current quarter, according to Zacks. Four analysts have issued estimates for Associated Banc’s earnings, with estimates ranging from $0.33 to $0.40. Associated Banc posted earnings of $0.58 per share in the same quarter last year, which would indicate a negative year-over-year growth rate of 36.2%. The firm is scheduled to issue its next quarterly earnings results after the market closes on Monday, January 1st.

According to Zacks, analysts expect that Associated Banc will report full-year earnings of $1.77 per share for the current year, with EPS estimates ranging from $1.67 to $1.88. For the next year, analysts expect that the company will report earnings of $2.20 per share, with EPS estimates ranging from $2.02 to $2.41. Zacks’ EPS calculations are a mean average based on a survey of sell-side research analysts that cover Associated Banc.

Associated Banc (NYSE:ASB – Get Rating) last posted its earnings results on Thursday, January 20th. The bank reported $0.49 earnings per share (EPS) for the quarter, beating the consensus estimate of $0.42 by $0.07. Associated Banc had a net margin of 31.05% and a return on equity of 9.22%. The firm had revenue of $272.70 million during the quarter, compared to analysts’ expectations of $263.68 million. During the same period in the previous year, the business posted $0.40 EPS.

A number of brokerages recently issued reports on ASB. StockNews.com began coverage on shares of Associated Banc in a report on Thursday, March 31st. They issued a “hold” rating for the company. Wells Fargo & Company raised shares of Associated Banc from an “equal weight” rating to an “overweight” rating and increased their target price for the stock from $26.00 to $28.00 in a research note on Monday, March 21st. Finally, Bank of America reissued an “underperform” rating and set a $23.00 price target on shares of Associated Banc in a research report on Tuesday, January 18th. One equities research analyst has rated the stock with a sell rating, four have given a hold rating and one has assigned a buy rating to the company. According to data from MarketBeat.com, the stock has an average rating of “Hold” and a consensus target price of $24.75.

The firm also recently declared a quarterly dividend, which was paid on Tuesday, March 15th. Stockholders of record on Tuesday, March 1st were given a dividend of $0.20 per share. The ex-dividend date was Monday, February 28th. This represents a $0.80 annualized dividend and a dividend yield of 3.72%. Associated Banc’s dividend payout ratio is presently 36.53%.

About Associated Banc (Get Rating) 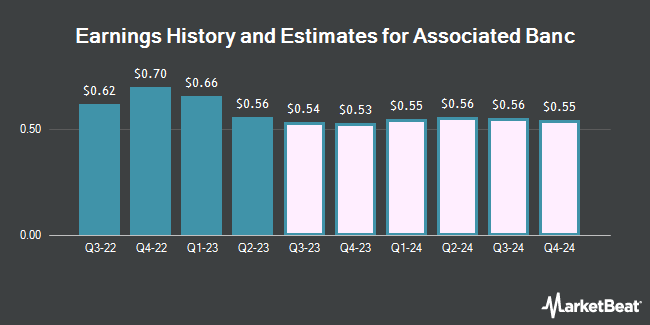 $0.55 Earnings Per Share Expected for Valvoline Inc. This Quarter

Clear Secure, Inc. Given Average Rating of “Hold” by Analysts