Greenbrook TMS Inc. (NASDAQ:GBNH – Get Rating) has earned a consensus rating of “Buy” from the eight ratings firms that are currently covering the company, Marketbeat Ratings reports. One equities research analyst has rated the stock with a sell recommendation and six have given a buy recommendation to the company. The average 1 year price objective among analysts that have updated their coverage on the stock in the last year is $16.10.

Greenbrook TMS (NASDAQ:GBNH – Get Rating) last issued its quarterly earnings data on Wednesday, March 30th. The company reported ($0.34) earnings per share (EPS) for the quarter, beating the Thomson Reuters’ consensus estimate of ($0.38) by $0.04. Greenbrook TMS had a negative net margin of 47.42% and a negative return on equity of 189.28%. During the same quarter last year, the business earned ($0.60) EPS. Analysts anticipate that Greenbrook TMS will post -1.21 EPS for the current fiscal year.

Greenbrook Tms, Inc engages in the provision of transcranial magnetic stimulation, an FDA-cleared, non-invasive therapy for the treatment of major depressive disorder. The company was founded on February 9, 2018 and is headquartered in Toronto, Canada. 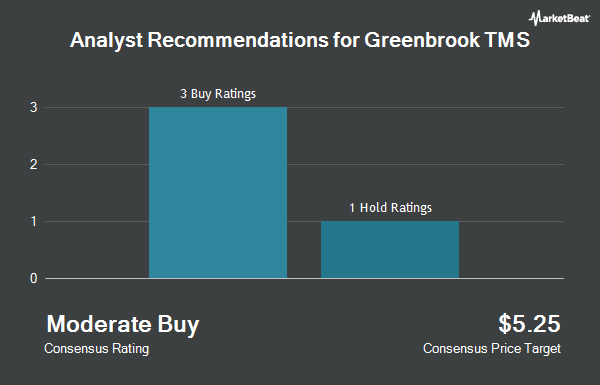 Complete the form below to receive the latest headlines and analysts' recommendations for Greenbrook TMS with our free daily email newsletter: