Wall Street analysts forecast that MRC Global Inc. (NYSE:MRC – Get Rating) will announce sales of $715.93 million for the current quarter, Zacks reports. Three analysts have provided estimates for MRC Global’s earnings, with the highest sales estimate coming in at $720.10 million and the lowest estimate coming in at $708.90 million. MRC Global posted sales of $609.00 million in the same quarter last year, which suggests a positive year-over-year growth rate of 17.6%. The company is expected to report its next quarterly earnings results after the market closes on Monday, January 1st.

According to Zacks, analysts expect that MRC Global will report full-year sales of $3.02 billion for the current financial year, with estimates ranging from $3.01 billion to $3.04 billion. For the next year, analysts forecast that the firm will post sales of $3.30 billion, with estimates ranging from $3.26 billion to $3.34 billion. Zacks Investment Research’s sales calculations are a mean average based on a survey of sell-side analysts that cover MRC Global.

MRC Global (NYSE:MRC – Get Rating) last announced its quarterly earnings results on Tuesday, February 15th. The oil and gas company reported $0.17 earnings per share for the quarter, topping analysts’ consensus estimates of ($0.06) by $0.23. MRC Global had a positive return on equity of 8.33% and a negative net margin of 0.75%. The company had revenue of $686.00 million during the quarter, compared to analysts’ expectations of $686.07 million. During the same quarter in the previous year, the firm earned ($0.05) earnings per share.

MRC has been the subject of several research analyst reports. StockNews.com cut MRC Global from a “buy” rating to a “hold” rating in a research report on Friday, April 8th. Zacks Investment Research raised MRC Global from a “hold” rating to a “strong-buy” rating and set a $8.75 price target for the company in a report on Tuesday, January 11th. Finally, TheStreet raised MRC Global from a “d+” rating to a “c-” rating in a report on Tuesday, March 15th. One equities research analyst has rated the stock with a hold rating, three have issued a buy rating and one has given a strong buy rating to the company’s stock. Based on data from MarketBeat, the stock presently has a consensus rating of “Buy” and a consensus price target of $10.92.

About MRC Global (Get Rating)

MRC Global Inc, through its subsidiaries, distributes pipes, valves, fittings, and other infrastructure products and services to the energy, industrial, and gas utility end-markets in the United States, Canada, and internationally. It offers ball, butterfly, gate, globe, check, diaphragm, needle, and plug valves; and other products, such as lined corrosion resistant piping systems, control valves, valve automation, and top work components, as well as valve modification services; and measurement, steam, and instrumentation products. 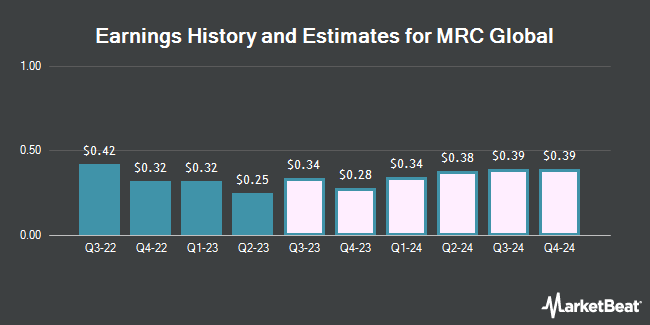 Complete the form below to receive the latest headlines and analysts' recommendations for MRC Global with our free daily email newsletter: