Parsons (NYSE:PSN – Get Rating) last issued its earnings results on Tuesday, February 22nd. The company reported $0.55 EPS for the quarter, beating the consensus estimate of $0.53 by $0.02. Parsons had a return on equity of 8.29% and a net margin of 1.75%. The business had revenue of $950.67 million for the quarter, compared to the consensus estimate of $944.19 million. During the same period last year, the business posted $0.46 EPS. The company’s revenue was down 1.4% compared to the same quarter last year. As a group, research analysts forecast that Parsons will post 1.7 EPS for the current year.

In related news, CFO George L. Ball bought 40,000 shares of the firm’s stock in a transaction that occurred on Friday, February 25th. The shares were bought at an average cost of $33.40 per share, with a total value of $1,336,000.00. The purchase was disclosed in a document filed with the SEC, which is accessible through the SEC website. 0.70% of the stock is currently owned by company insiders.

About Parsons (Get Rating)

Parsons Corporation provides integrated solutions and services in the defense, intelligence, and critical infrastructure markets in North America, the Middle East, and internationally. It operates through two segments, Federal Solutions and Critical Infrastructure. The company offers cyber security and intelligence services, as well as offensive and defensive cybersecurity platforms, tools, and operations to the U.S. 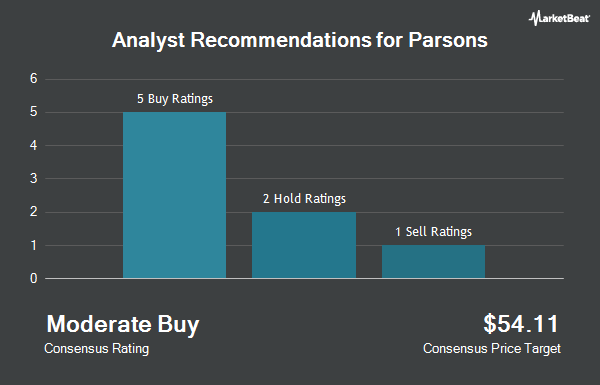 Receive News & Ratings for Parsons Daily - Enter your email address below to receive a concise daily summary of the latest news and analysts' ratings for Parsons and related companies with MarketBeat.com's FREE daily email newsletter.

Marathon Oil Co. Expected to Announce Earnings of $1.23 Per Share

Complete the form below to receive the latest headlines and analysts' recommendations for Parsons with our free daily email newsletter: