Albany International (NYSE:AIN – Get Rating) last announced its earnings results on Tuesday, February 15th. The textile maker reported $0.85 earnings per share for the quarter, topping the consensus estimate of $0.60 by $0.25. Albany International had a net margin of 12.75% and a return on equity of 13.44%. The business had revenue of $239.92 million during the quarter, compared to the consensus estimate of $224.76 million. During the same quarter in the prior year, the firm earned $0.89 earnings per share. On average, analysts expect Albany International to post $3 EPS for the current fiscal year and $4 EPS for the next fiscal year.

The firm also recently announced a quarterly dividend, which was paid on Thursday, April 7th. Stockholders of record on Monday, March 21st were paid a dividend of $0.21 per share. The ex-dividend date was Friday, March 18th. This represents a $0.84 annualized dividend and a dividend yield of 1.03%. Albany International’s dividend payout ratio (DPR) is 23.01%.

About Albany International (Get Rating)

Albany International Corp., together with its subsidiaries, engages in the textile and materials processing business. The company operates in two segments, Machine Clothing (MC) and Albany Engineered Composites (AEC). The MC segment designs, manufactures, and markets paper machine clothing for use in the manufacturing of papers, paperboards, tissues, and towels. 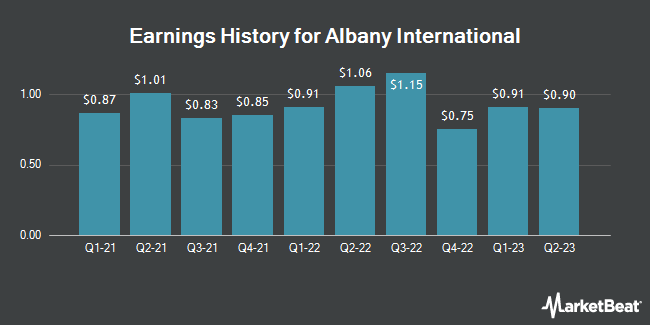 Complete the form below to receive the latest headlines and analysts' recommendations for Albany International with our free daily email newsletter: