Wall Street brokerages predict that Bank of Marin Bancorp (NASDAQ:BMRC – Get Rating) will announce sales of $32.77 million for the current quarter, according to Zacks Investment Research. Three analysts have provided estimates for Bank of Marin Bancorp’s earnings. The lowest sales estimate is $32.20 million and the highest is $33.40 million. Bank of Marin Bancorp reported sales of $23.86 million in the same quarter last year, which would suggest a positive year-over-year growth rate of 37.3%. The company is scheduled to announce its next quarterly earnings report before the market opens on Monday, January 1st.

According to Zacks, analysts expect that Bank of Marin Bancorp will report full-year sales of $131.33 million for the current fiscal year, with estimates ranging from $130.10 million to $132.50 million. For the next financial year, analysts expect that the company will post sales of $137.57 million, with estimates ranging from $135.40 million to $139.20 million. Zacks’ sales averages are an average based on a survey of sell-side research firms that cover Bank of Marin Bancorp.

Bank of Marin Bancorp (NASDAQ:BMRC – Get Rating) last issued its quarterly earnings results on Monday, January 24th. The bank reported $0.66 earnings per share (EPS) for the quarter, topping the Zacks’ consensus estimate of $0.57 by $0.09. Bank of Marin Bancorp had a net margin of 28.04% and a return on equity of 9.44%. The company had revenue of $33.35 million for the quarter, compared to analyst estimates of $32.50 million. During the same period in the prior year, the firm earned $0.60 earnings per share.

In other news, Director Russell A. Colombo sold 7,113 shares of the company’s stock in a transaction on Monday, January 31st. The shares were sold at an average price of $37.12, for a total value of $264,034.56. The sale was disclosed in a legal filing with the Securities & Exchange Commission, which is available at this hyperlink. Corporate insiders own 5.59% of the company’s stock.

About Bank of Marin Bancorp (Get Rating)

Bank of Marin Bancorp operates as the holding company for Bank of Marin that provides a range of financial services primarily to small to medium-sized businesses, professionals, not-for-profit organizations, and individuals in California, the United States. It offers personal and business checking and savings accounts; and individual retirement, health savings, and demand deposit marketplace accounts, as well as time certificates of deposit, certificate of deposit account registry and insured cash sweep services. 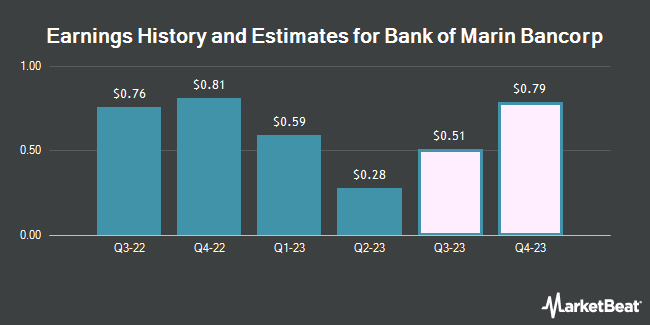 Complete the form below to receive the latest headlines and analysts' recommendations for Bank of Marin Bancorp with our free daily email newsletter: