Sirius XM (NASDAQ:SIRI – Get Rating) was downgraded by analysts at Morgan Stanley from an “equal weight” rating to an “underweight” rating in a note issued to investors on Monday, The Fly reports.

Several other analysts also recently commented on SIRI. JPMorgan Chase & Co. downgraded Sirius XM from a “neutral” rating to an “underweight” rating and cut their target price for the company from $7.00 to $6.00 in a research note on Thursday, January 13th. StockNews.com started coverage on Sirius XM in a report on Thursday, March 31st. They set a “buy” rating on the stock. Finally, Wells Fargo & Company cut Sirius XM from an “overweight” rating to an “equal weight” rating and lowered their price target for the company from $8.00 to $7.00 in a report on Tuesday, January 4th. Three analysts have rated the stock with a sell rating, one has given a hold rating and five have issued a buy rating to the stock. According to MarketBeat, Sirius XM presently has an average rating of “Hold” and an average target price of $7.33.

Sirius XM (NASDAQ:SIRI – Get Rating) last issued its earnings results on Tuesday, February 1st. The company reported $0.08 EPS for the quarter, beating the consensus estimate of $0.07 by $0.01. Sirius XM had a negative return on equity of 54.26% and a net margin of 15.10%. The business had revenue of $2.28 billion for the quarter, compared to the consensus estimate of $2.24 billion. During the same period last year, the business posted $0.07 EPS. The company’s revenue was up 4.2% compared to the same quarter last year. Research analysts predict that Sirius XM will post 0.32 earnings per share for the current fiscal year. 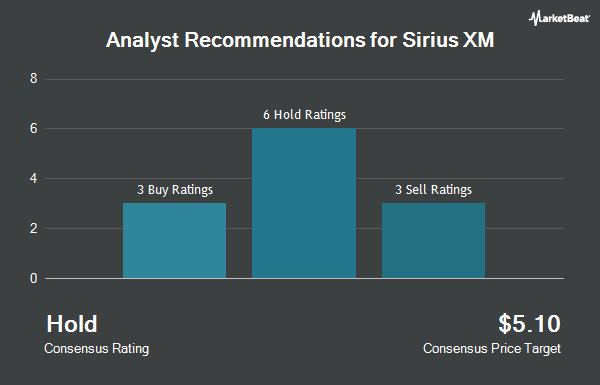 $62.56 Million in Sales Expected for Inseego Corp. This Quarter

$38.74 Million in Sales Expected for Codexis, Inc. This Quarter

Assura Given Overweight Rating at Barclays