Umpqua (NASDAQ:UMPQ – Get Rating) is set to announce its earnings results after the market closes on Wednesday, April 20th. Analysts expect the company to announce earnings of $0.39 per share for the quarter. Investors that wish to listen to the company’s conference call can do so using this link.

Umpqua (NASDAQ:UMPQ – Get Rating) last announced its quarterly earnings results on Wednesday, January 19th. The bank reported $0.41 earnings per share (EPS) for the quarter, missing the Zacks’ consensus estimate of $0.44 by ($0.03). The firm had revenue of $316.12 million for the quarter, compared to analyst estimates of $307.57 million. Umpqua had a return on equity of 15.40% and a net margin of 31.88%. The firm’s quarterly revenue was down 11.9% on a year-over-year basis. During the same quarter in the prior year, the business earned $0.68 EPS. On average, analysts expect Umpqua to post $2 EPS for the current fiscal year and $2 EPS for the next fiscal year.

The business also recently disclosed a quarterly dividend, which was paid on Friday, February 25th. Investors of record on Tuesday, February 15th were given a dividend of $0.21 per share. The ex-dividend date of this dividend was Monday, February 14th. This represents a $0.84 dividend on an annualized basis and a dividend yield of 4.71%. Umpqua’s payout ratio is currently 43.75%.

A number of research firms recently weighed in on UMPQ. Zacks Investment Research cut shares of Umpqua from a “strong-buy” rating to a “hold” rating in a research report on Thursday, March 31st. Keefe, Bruyette & Woods began coverage on Umpqua in a research report on Friday, February 11th. They set a “market perform” rating on the stock. Wells Fargo & Company downgraded Umpqua from an “overweight” rating to an “equal weight” rating and cut their price target for the stock from $24.00 to $20.00 in a report on Tuesday, January 4th. Finally, StockNews.com began coverage on Umpqua in a report on Thursday, March 31st. They set a “hold” rating on the stock. Seven analysts have rated the stock with a hold rating, According to MarketBeat.com, Umpqua has a consensus rating of “Hold” and a consensus price target of $20.90. 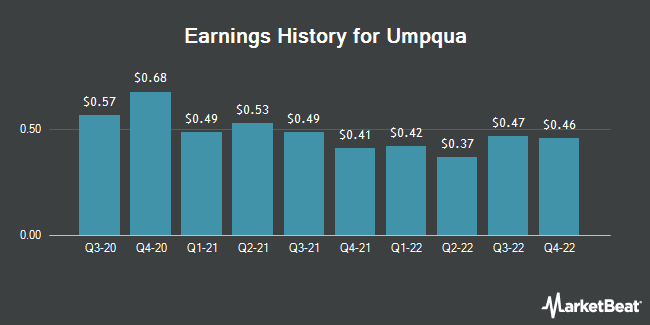