Wendy’s (NASDAQ:WEN – Get Rating) was downgraded by stock analysts at BMO Capital Markets from an “outperform” rating to a “market perform” rating in a research report issued on Monday, The Fly reports.

Wendy’s (NASDAQ:WEN – Get Rating) last issued its quarterly earnings data on Tuesday, March 1st. The restaurant operator reported $0.16 earnings per share (EPS) for the quarter, topping analysts’ consensus estimates of $0.15 by $0.01. Wendy’s had a return on equity of 35.44% and a net margin of 10.56%. The company had revenue of $473.20 million during the quarter, compared to analysts’ expectations of $459.89 million. During the same quarter in the previous year, the company posted $0.17 earnings per share. The business’s revenue was down .2% on a year-over-year basis. Research analysts forecast that Wendy’s will post 0.84 earnings per share for the current year.

About Wendy’s (Get Rating)

The Wendy's Company, together with its subsidiaries, operates as a quick-service restaurant company. It operates through three segments: Wendy's U.S., Wendy's International, and Global Real Estate & Development. The company is involved in operating, developing, and franchising a system of quick-service restaurants specializing in hamburger sandwiches. 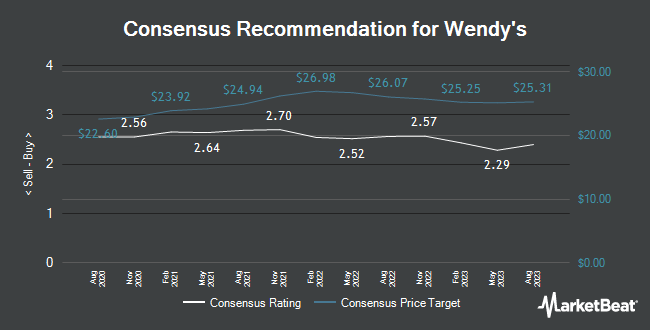 Receive News & Ratings for Wendy's Daily - Enter your email address below to receive a concise daily summary of the latest news and analysts' ratings for Wendy's and related companies with MarketBeat.com's FREE daily email newsletter.

The RMR Group Inc. Short Interest Up 27.4% in April

Complete the form below to receive the latest headlines and analysts' recommendations for Wendy's with our free daily email newsletter: