Equities analysts forecast that BOK Financial Co. (NASDAQ:BOKF – Get Rating) will report sales of $395.80 million for the current fiscal quarter, according to Zacks Investment Research. Three analysts have made estimates for BOK Financial’s earnings. The lowest sales estimate is $382.30 million and the highest is $417.80 million. BOK Financial reported sales of $444.32 million in the same quarter last year, which would suggest a negative year-over-year growth rate of 10.9%. The company is scheduled to announce its next earnings report before the market opens on Monday, January 1st.

BOK Financial (NASDAQ:BOKF – Get Rating) last announced its quarterly earnings data on Wednesday, January 19th. The bank reported $1.71 earnings per share (EPS) for the quarter, missing the Zacks’ consensus estimate of $1.81 by ($0.10). BOK Financial had a net margin of 32.34% and a return on equity of 11.56%. The company had revenue of $423.40 million for the quarter, compared to analysts’ expectations of $452.93 million. During the same quarter in the previous year, the firm posted $2.21 EPS.

BOKF has been the subject of several recent analyst reports. Wells Fargo & Company lifted their target price on shares of BOK Financial from $105.00 to $115.00 and gave the stock an “overweight” rating in a report on Tuesday, January 4th. StockNews.com assumed coverage on shares of BOK Financial in a report on Thursday, March 31st. They issued a “hold” rating for the company. Seven research analysts have rated the stock with a hold rating and one has issued a buy rating to the stock. According to data from MarketBeat.com, the stock currently has a consensus rating of “Hold” and an average target price of $101.57.

The business also recently announced a quarterly dividend, which was paid on Wednesday, February 23rd. Investors of record on Tuesday, February 15th were issued a $0.53 dividend. This represents a $2.12 annualized dividend and a yield of 2.38%. The ex-dividend date of this dividend was Monday, February 14th. BOK Financial’s dividend payout ratio is currently 23.69%.

About BOK Financial (Get Rating) 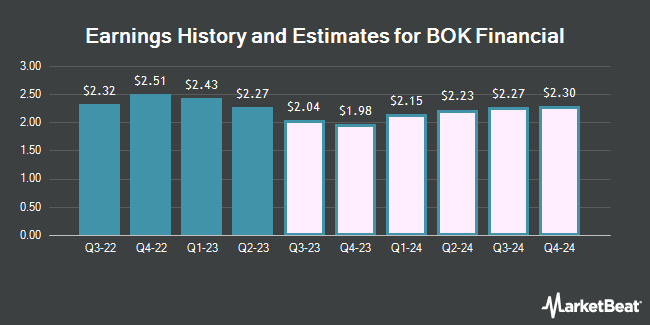 Comparing Esports Technologies and Its Competitors

Head to Head Analysis: Zevia PBC vs. Its Competitors